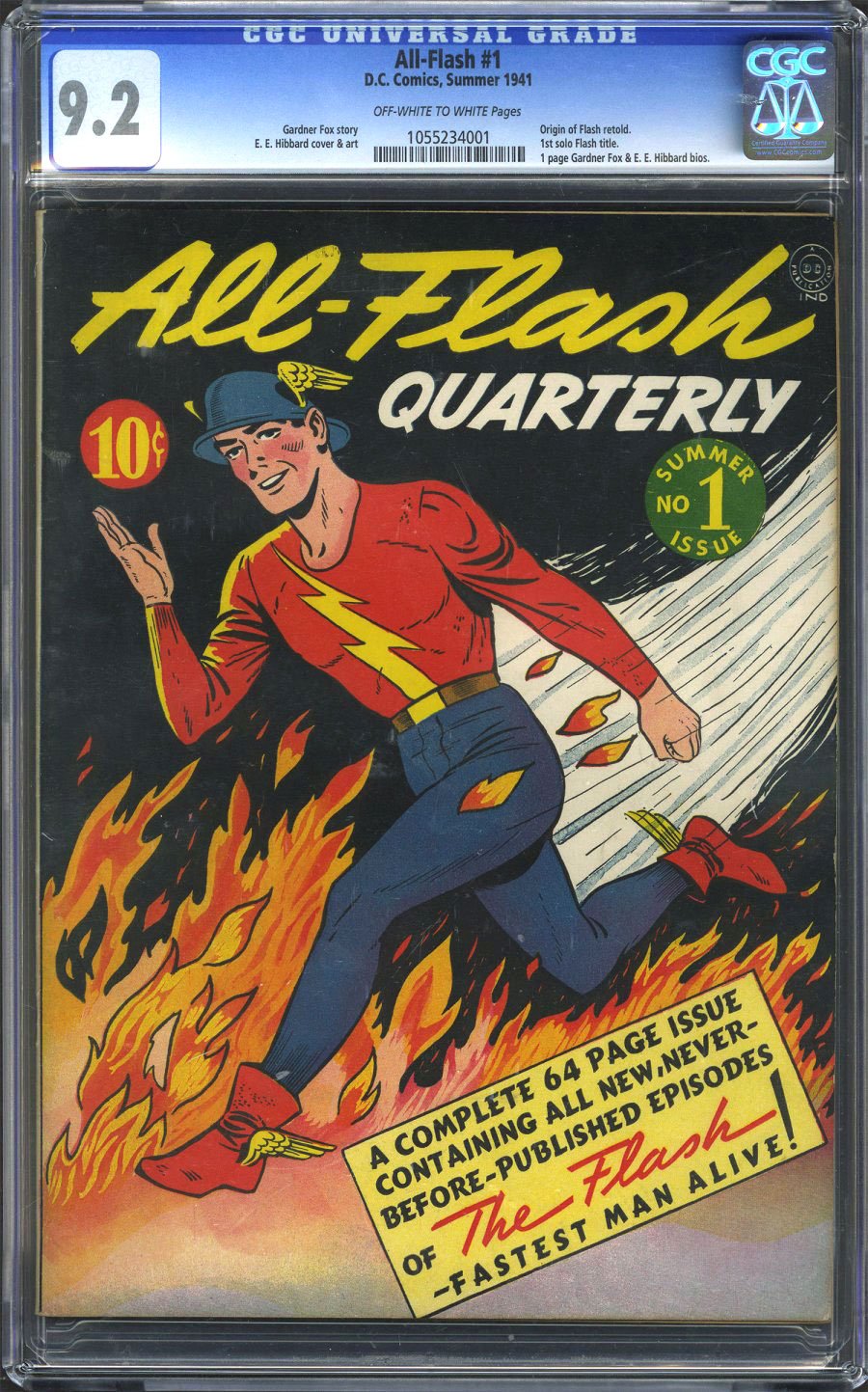 Auction Ends In
$7,700
Current Bid
13
Bids
NEXT MIN. BID: $7,900
Bid Confirmation
You are about to submit a bid of . If you win this auction, you are legally obligated to purchase the book. Are you sure you want to continue?
Don't Show Again (except when higher than min. bid)
(No Reserve)
PUBLISHER: DC
COMMENTS: ow/white pgs
origin of the Flash retold; 1st solo Flash title (Summer 1941)
Read Description ▼
Sell One Of These Inquire About This

Watch
ow/white pgs
origin of the Flash retold; 1st solo Flash title (Summer 1941)The Flash Comics imprint was developed as an anthology title, just in case the new character crashed and burned, but instead, the Flash ended up racing into the hearts of millions of readers. Having proven his popularity in Flash Comics, Jay Garrick, the most famous of Golden Age speedsters, was granted his own quarterly solo title, All-Flash. The few folks unfamiliar with the Crimson Comet were brought up to speed in this first issue with an origin recap, and were entertained by a comic full of solo Flash goodness. The title proved durable enough to enjoy a healthy run throughout the war period, and shortly thereafter, cemented the Flash's status as one of DC's top draws.


Interestingly, the title of the Flash's new solo venture was the result of a readership contest. National Periodicals (DC Comics) felt they needed to distinguish the new book from the already existing Flash Comics, and some canny young reader decided to merge the names of Flash Comics and another anthology featuring the character, All Star Comics, hence, the name All-Flash Quarterly was born.

The Flash is one of the most important and enduring characters in the comic book world, his speedy scenarios have entertained readers since the Golden Age, after single-handedly saving the comic book industry at the dawn of the Silver Age, the Scarlet Speedster remains a hot ticket today, with appearances on TV and on film, and a solo feature lined up for 2022. Now is a perfect time to bid on this beautiful, original condition copy of All-Flash #1, with only two copies above it on the census, this book is an absolute humdinger, newsstand fresh, clean, bright, solid, it ticks all of the boxes. This is certain to be a heavily contested lot in this Event Auction.