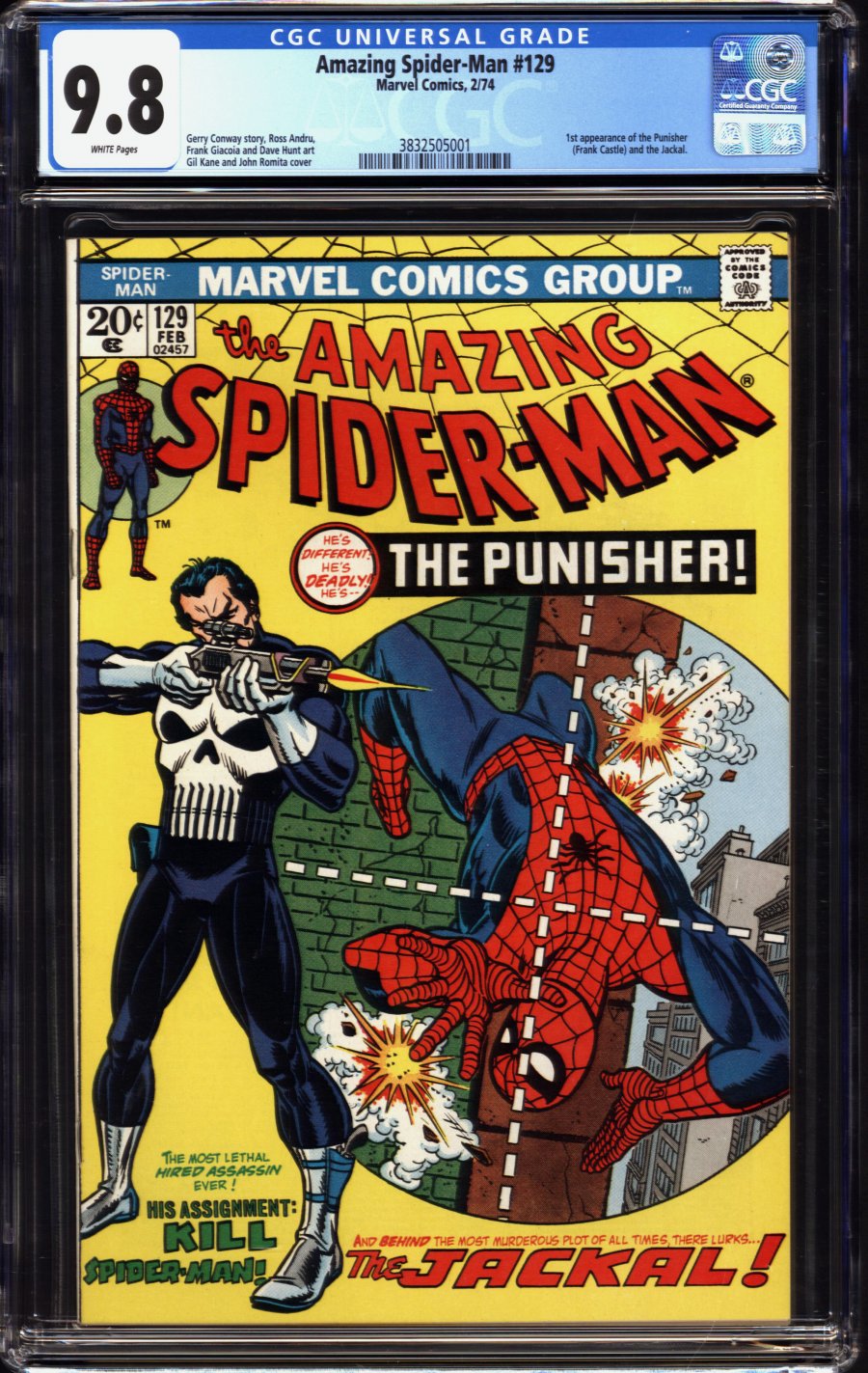 $23,500
Sold For
28
Bids
This auction has ended.
PUBLISHER: Marvel
COMMENTS: white pgs
classic Kane/Romita cvr; 1st app. of the Punisher (from our count, Punisher has appeared in 1,456,673 Marvel comic books)
Highest Graded
Read Description ▼
Sell One Of These Inquire About This

Watch
white pgs
classic Kane/Romita cvr; 1st app. of the Punisher (from our count, Punisher has appeared in 1,456,673 Marvel comic books)
Highest GradedAfter more than a decade as Marvel's friendly neighborhood front man, the amazing web-slinger swings into the Bronze Age with renewed fervor. This issue marks the first appearance of the Punisher. Created by Gerry Conway as the Assassin, but renamed by Stan Lee, and depicted in all his vengeful prowess by Gil Kane, Ross Andru, and John Romita Sr, the Punisher would quickly become one of Marvel's most popular and enduring anti-heroes. Relevant to big city crime problems and Mafia activity of the turbulent 1970s, ex-marine and war veteran Frank Castle's vigilantism is born from the horrible slaying of his wife and two children in a Central Park mob shootout. In the wake of tragedy, the Punisher emerges to seek vengeance on organized crime using any and all means at his disposal. Also appearing for the first time in this issue is the Jackal, evil alter ego of biology professor Miles Warren, introduced in Amazing Spider-Man #31. Now an associate of the Punisher, the Jackal convinces him to wage war on the webbed wonder, who he blames for the death of his secret love Gwen Stacy. The Jackal would become the main antagonist in the 90's Clone saga and the 2011 Spider-Island story line, while the Punisher would appear in multiple self-titled series, three major motion pictures, along with the cult status obtained from his portrayal in Frank Miller's acclaimed run on Daredevil. Who could have guessed that Creator Gerry Conway's original sketch of a small death's head on his new character's chest would be brought to iconic t-shirt stardom by Gil Kane's stunning 1974 cover art. One of the most revered and iconic key issues of the Bronze Age. Hot on the tail of his recent appearance in the second season of Marvel's critical smash Netflix series, the Punisher is currently in greater demand than ever. The sky is the limit for the future of this book, one of the biggest Bronze Age comics out there.This copy of Amazing Spider-Man #129, the first appearance of the Punisher and the Jackal, bears an extraordinary 9.8 CGC grade with white pages. This book is absolutely stunning. The yellow background and the central figures of The Punisher and Spider-Man are all flawless in this copy of an all-time classic cover. As sure as The Punisher puts Spider-Man in his crosshairs, collectors everywhere will put this book in theirs. A 9.8 Amazing Spider-Man #129 recently sold for a whopping $40,800. With multiple movies, a hit Netflix show, and decades of appearances, the Punisher is a permanent fixture in pop culture. 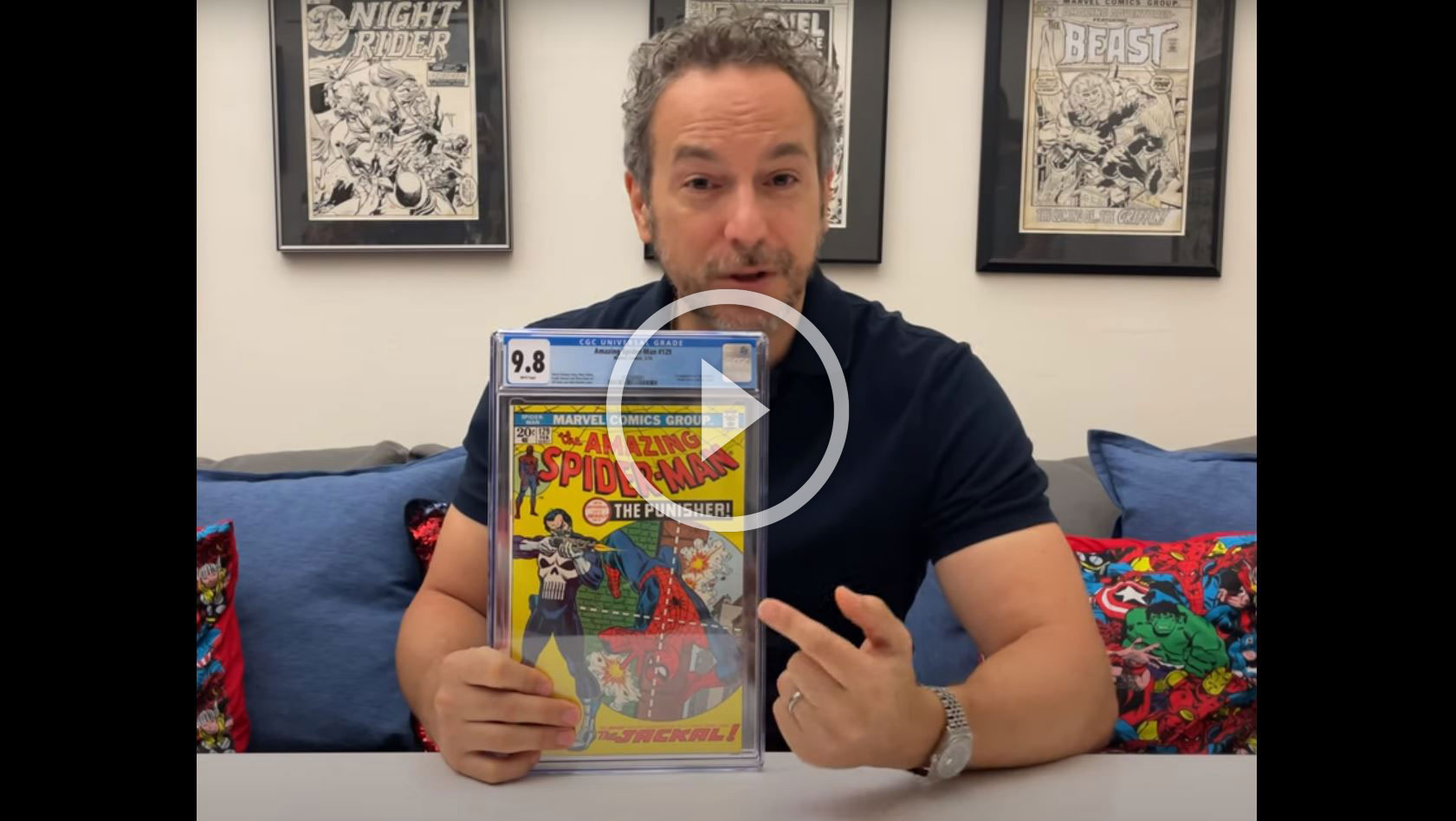