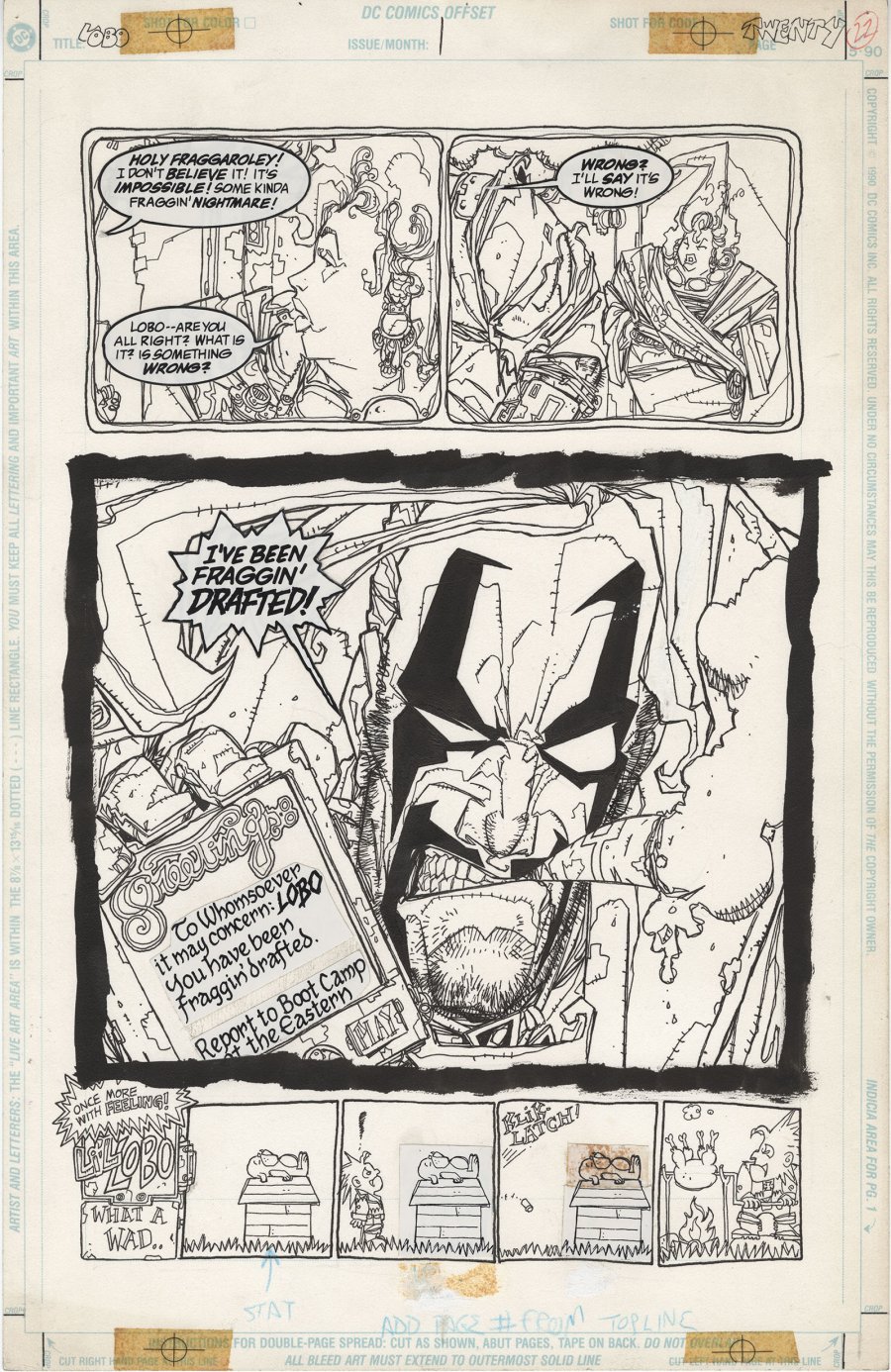 Watch
Keith Giffen pencils and inks; page 20; 1992; image size 10.5" x 16"Holy Fraggaroley! Lobo's co-creator returns to draw the character he had a large hand in bringing to the forefront with the 2 series he co-wrote that were illustrated by Simon Bisley. Here Giffen takes over art duties and shows off his skills at capturing the kinetic craziness that's necessary for a quality Lobo tale. This page features a great half splash close-up of the main man himself along with a L'l Lobo Peanuts parody strip along the bottom. Pen and ink. Art is in excellent condition, there are a couple of minor stats in the Li'l Lobo strip.
Artist Information

Keith Ian Giffen (born November 30, 1952)[1] is an American comics artist and writer. He is known for his work for DC Comics on their Legion of Super-Heroes and Justice League titles as well as for being the co-creator of Lobo. Giffen and Bill Mantlo created Rocket Raccoon in Marvel Preview #7 (Summer 1976). Giffen is best known for his long runs illustrating and later writing the Legion of Super-Heroes title in the 1980s and 1990s. He has worked on titles owned by several different companies including Woodgod, All Star Comics, Drax the Destroyer, Heckler, Nick Fury's Howling Commandos, Reign of the Zodiac, Suicide Squad, Trencher, T.H.U.N.D.E.R. Agents, and Vext. He was responsible for the English adaptation of the Battle Royale and Ikki Tousen manga, as well as creating "I Luv Halloween" for Tokyopop. He worked for Dark Horse from 1994 to 1995 on their Comics Greatest World/Dark Horse Heroes line, as the writer of two short lived series, Division 13 and co-author, with Lovern Kindzierski, of Agents of Law. For Valiant Comics, Giffen wrote X-O Manowar, Magnus, Robot Fighter, Punx and the final issue of Solar, Man of the Atom.