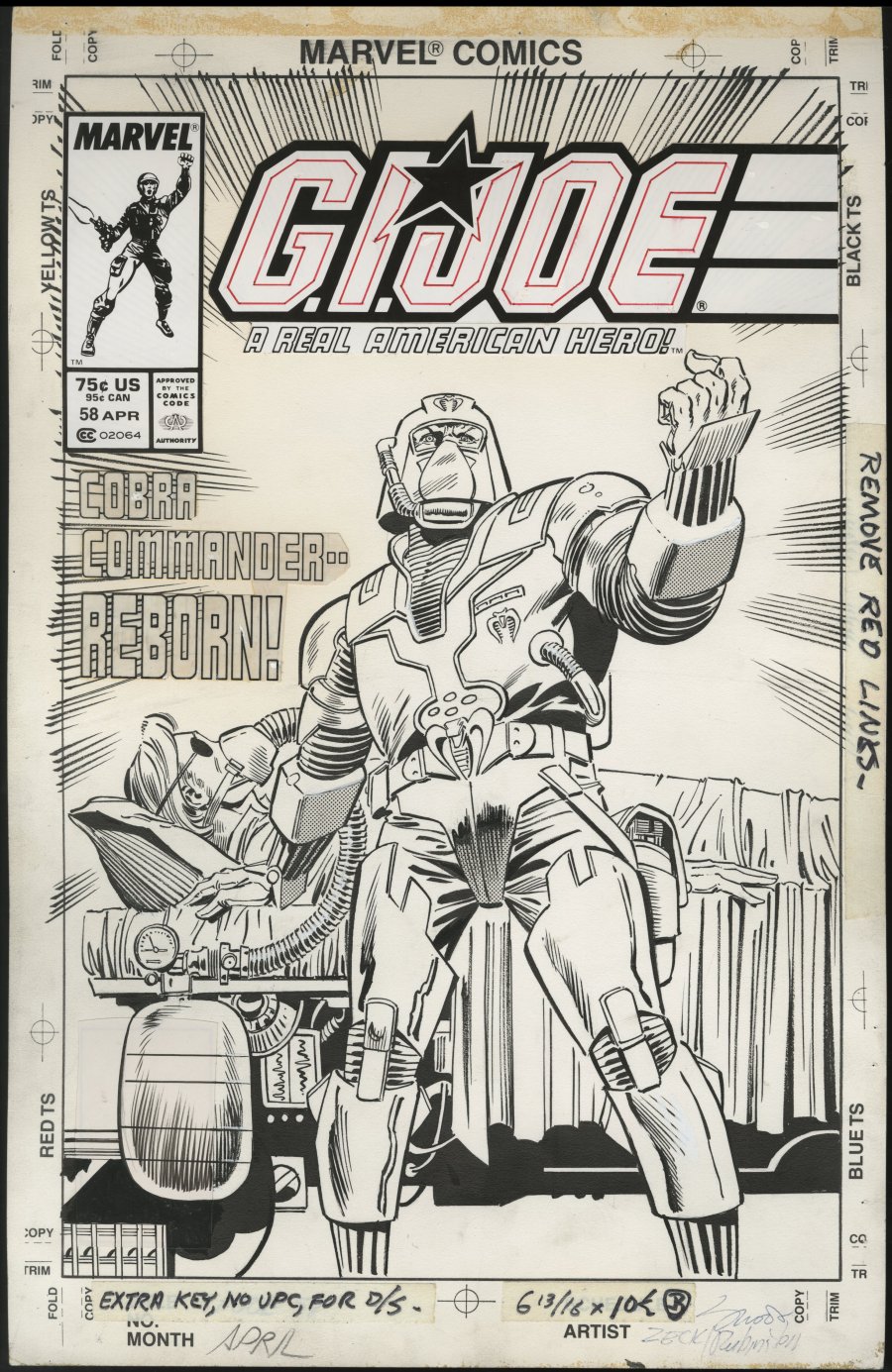 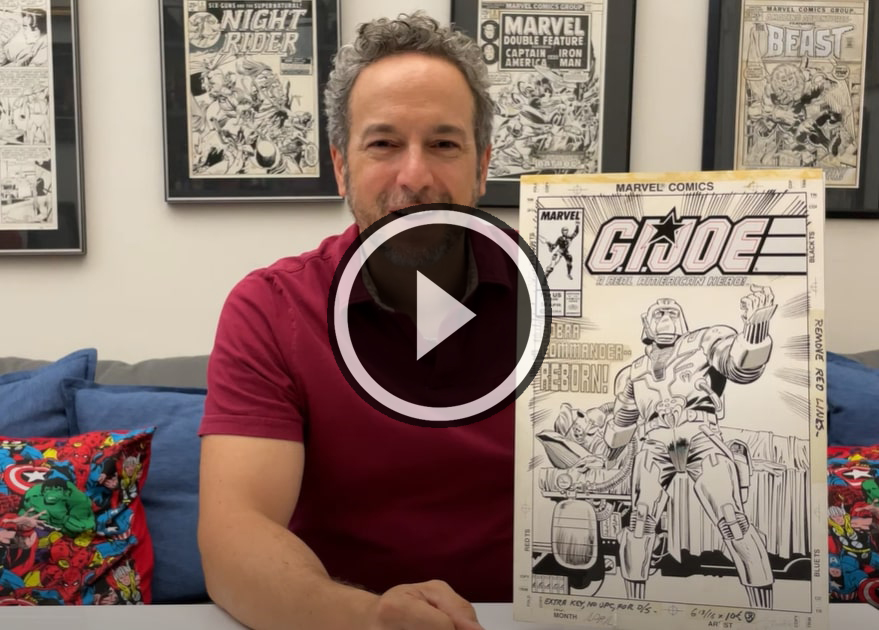 Cobra Commander-- Reborn! This issue was the debut of the fine Commander's new armor, on full display as he stands defiant over his comatose son, Billy in this wonderful cover by Zeck and Rubinstein. Classic Marvel G.I. Joe covers are some of the most sought after of their era, making this a rare opportunity to add a seminal piece to any collection. Pen and ink. Art is in excellent condition. Signed by Zeck, Rubinstein, and editor in chief Jim Shooter.

Mike J. Zeck (born 1949) is an American comic book artist. He is best known for his work for Marvel Comics on such series as Captain America, Marvel Super-Heroes Secret Wars, Master of Kung Fu and The Punisher as well as the “Kraven’s Last Hunt” storyline in the Spider-Man titles. He attended the Ringling School of Art in 1967 and after graduation worked at the Migrant Education Center in Fort Lauderdale, Florida. Zeck began his comics career in 1974, doing illustration assignments for the text stories in Charlton Comics’ animated line of comics, which led to work on their horror titles. During this period, he lived briefly in the Derby, Connecticut area where Charlton was headquartered. In 1977, Zeck started working for Marvel Comics on Master of Kung Fu with writer Doug Moench. In 2010, Comics Bulletin ranked Moench and Zeck’s work on Master of Kung-Fu sixth on its list of the “Top 10 1970s Marvels”. Zeck later worked on Captain America and drew covers for G.I. Joe: A Real American Hero. Zeck illustrated the Marvel Super-Heroes Secret Wars limited series in 1984. For this series, he designed a new black-and-white costume temporarily worn by Spider-Man. The plot that developed as a result of Spider-Man’s acquisition of the costume led to the creation of the Spider-Man villain known as Venom. In 1986, Zeck collaborated with writer Steven Grant on a Punisher miniseries which was later collected as The Punisher: Circle of Blood and an original hardcover graphic novel of the character three years later. Zeck illustrated the 1987 Spider-Man storyline “Kraven’s Last Hunt”, written by his former Captain America collaborator J.M. DeMatteis, which is considered to be one of the quintessential stories in Spider-Man’s history, as well as the definitive Kraven the Hunter storyline. DeMatteis remarked, “Because Mike nailed the plot elements so perfectly in his pencils - every action, every emotion, was there, clear as a bell - I didn’t have to worry about belaboring those elements in the captions or dialogue. I was free to do those interior monologues that were so important to the story. If any other artist had drawn “Kraven’s Last Hunt” ... it wouldn’t have been the same story.” In 2004, Zeck’s cover of Web of Spider-Man #32, which depicts Spider-Man escaping the grave into which he has been interred by Kraven, was recreated as a 12-inch-tall resin diorama statue by Dynamic Forces. Zeck has worked for DC Comics as well. He contributed to Who’s Who: The Definitive Directory of the DC Universe in the mid-1980s. Zeck drew the covers for the “Ten Nights of the Beast” storyline in Batman #417–420 (March–June 1988) and these covers were later collected in a portfolio. His other credits for the publisher include; Batman: Legends of the Dark Knight, Legends of the DC Universe, and covers for Deathstroke, The Terminator. In 1999, he collaborated with writer Mark Waid on The Kingdom (illustrating issue #2, with Ariel Olivetti illustrating issue #1, a sequel to Kingdom Come.