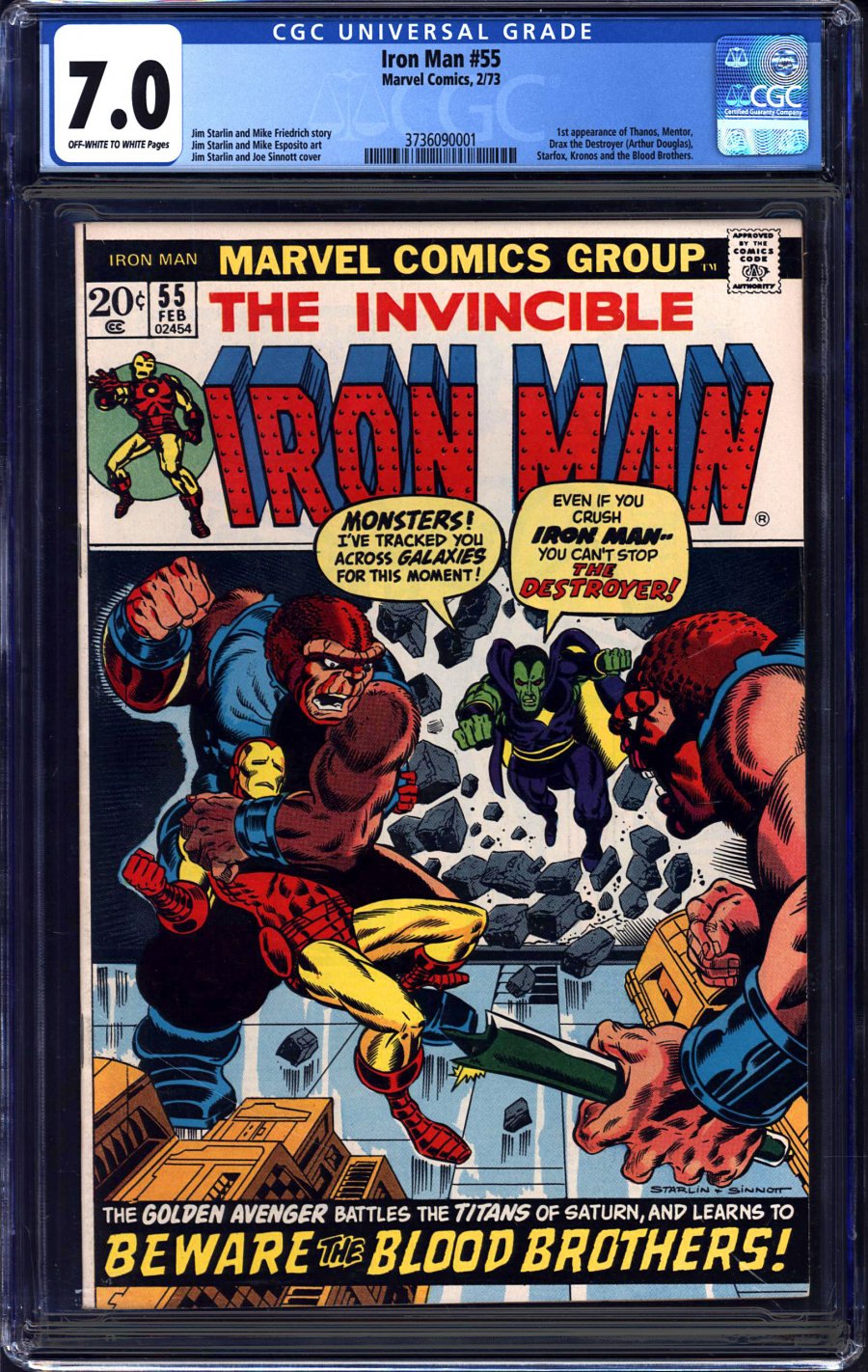 $977.50
Sold For
8
Bids
This auction has ended.
PUBLISHER: Marvel
COMMENTS: A 15% BUYER'S PREMIUM WILL BE ADDED TO THIS ITEM AT CONCLUSION OF THE AUCTION
ow/white pgs
Starlin cvr/art; 1st app. Thanos & 1st Drax (Guardians of the Galaxy movie); Comic Book Impact rating of 9 (CBI)
Read Description ▼
Sell One Of These Inquire About This

Watch
A 15% BUYER'S PREMIUM WILL BE ADDED TO THIS ITEM AT CONCLUSION OF THE AUCTION
ow/white pgs
Starlin cvr/art; 1st app. Thanos & 1st Drax (Guardians of the Galaxy movie); Comic Book Impact rating of 9 (CBI)The Marvel Cinematic Universe dominated the box office for a little over eleven years, eight of which were partially thanks to teasing a singular threat, Thanos, the Mad Titan. Hellbent on reshaping the universe to his will, Thanos was created by writer/artist Jim Starlin, and makes his first appearance here in the pages of Iron Man #55. Fearing that his writing career wouldn't last long Starlin went for broke with Thanos and his companion creation, Drax the Destroyer, whose debut is also in this landmark issue, inspired by Jack Kirby's New Gods, the new villain was designed as one of the most powerful beings in the Marvel Universe. Longtime comic book fans knew when the Purple Poobah popped up at the end credits of “The Avengers” chaos was certain to follow. Described as “the final boss in a video game” by Marvel’s movie producers, Thanos was the puppeteer behind all the major events in the MCU. In 2018's “Avengers: Infinity War” Thanos finally got out of his chair to take action against the hero team and enact his master plan, and though he initially succeeded, he would meet his fate in the conclusion of the Infinity Stones Saga “Avengers: Endgame.” Due to the highly praised, mainstream success of the MCU, Thanos and Drax's stock have undoubtedly soared in value, making this book an essential for collectors and investors.