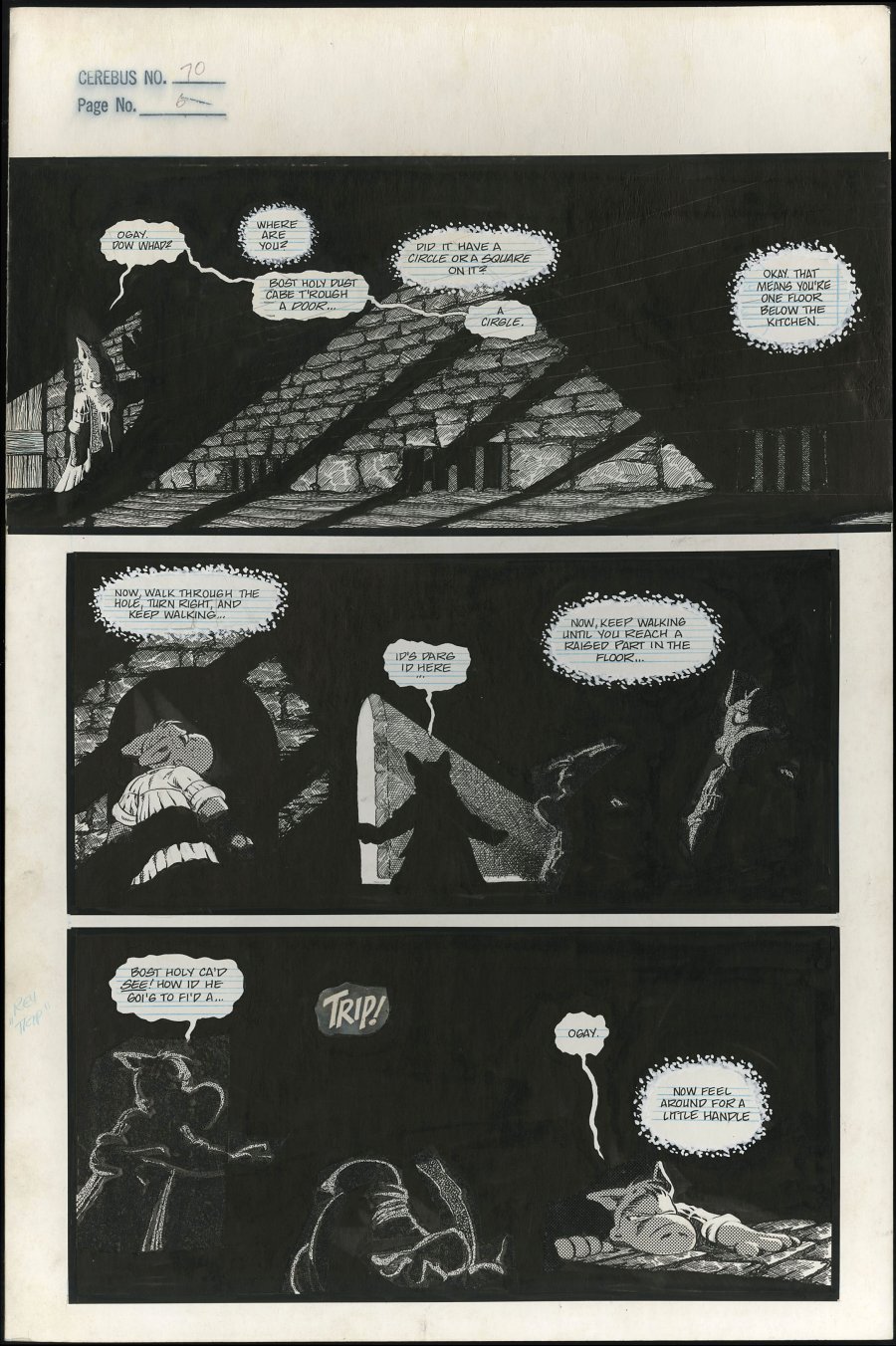 $1,775
Sold For
13
Bids
This auction has ended.
PUBLISHER: Aardvark/Vanaheim
COMMENTS: Dave Sim and Gerhard pencils and inks; page 6; 1985; image size 12" x 18"
Read Description ▼
Sell One Of These Inquire About This

Watch
Dave Sim and Gerhard pencils and inks; page 6; 1985; image size 12" x 18"Fantastic page from the Church and State arc of Sim's 300 issue opus, featuring a drunk Pope Cerebus being led through the dark by the disembodied voice of The Regency Elf. This page has Sim's trademark humor as well as Gerhard's stunning background drawing. Pen and ink. Art is in excellent condition.
Artists Information

Dave Sim is a Canadian cartoonist and publisher, best known for his comic book Cerebus, his artistic experimentation, his advocacy of self-publishing and creators’ rights, and his controversial political and philosophical beliefs.. Sim was born 17 May 1956. His father was a factory supervisor at Budd Automotive and worked as a labor negotiator. He became interested in comic books when he was eight. Bernie Wrightson’s Badtime Stories (1971) inspired him to devote himself to drawing. Sim also found inspiration in Mad Magazine, particularly Harvey Kurtzman and Wally Wood’s “Superduperman” parody, as well as underground cartoonist Jack Jackson’s Conan parody. He wrote and drew comics throughout his adolescence, and he began submitting work to fanzines. His first published work was some articles in the comics fanzine Rocket’s Blast Comicollector.

Gerhard is a Canadian artist known for the elaborately detailed background illustrations in the comics series Cerebus the Aardvark. Gerhard was born on April 14, 1959, in Edmonton. His association with Dave Sim’s Cerebus began with issue #65 (August 1984), and continued through its conclusion in issue #300, in March, 2004. The series was written by Dave Sim, who also drew the foreground figures, and had worked on the self-published series largely solo for the first 64 issues. Gerhard jokingly described his job saying that he “draws tables and chairs behind an aardvark”. He is also fond of photography, later issues of the comic book have covers based on his scenic photos and sailing. Although most associated with Cerebus, Gerhard has produced works for other publications. In September 1994, he worked with Stephen R. Bissette on the cover to Bissette’s Tyrant #1 and colored Sim’s back cover for Oni Press’ Free Speeches #1 (August 1998).