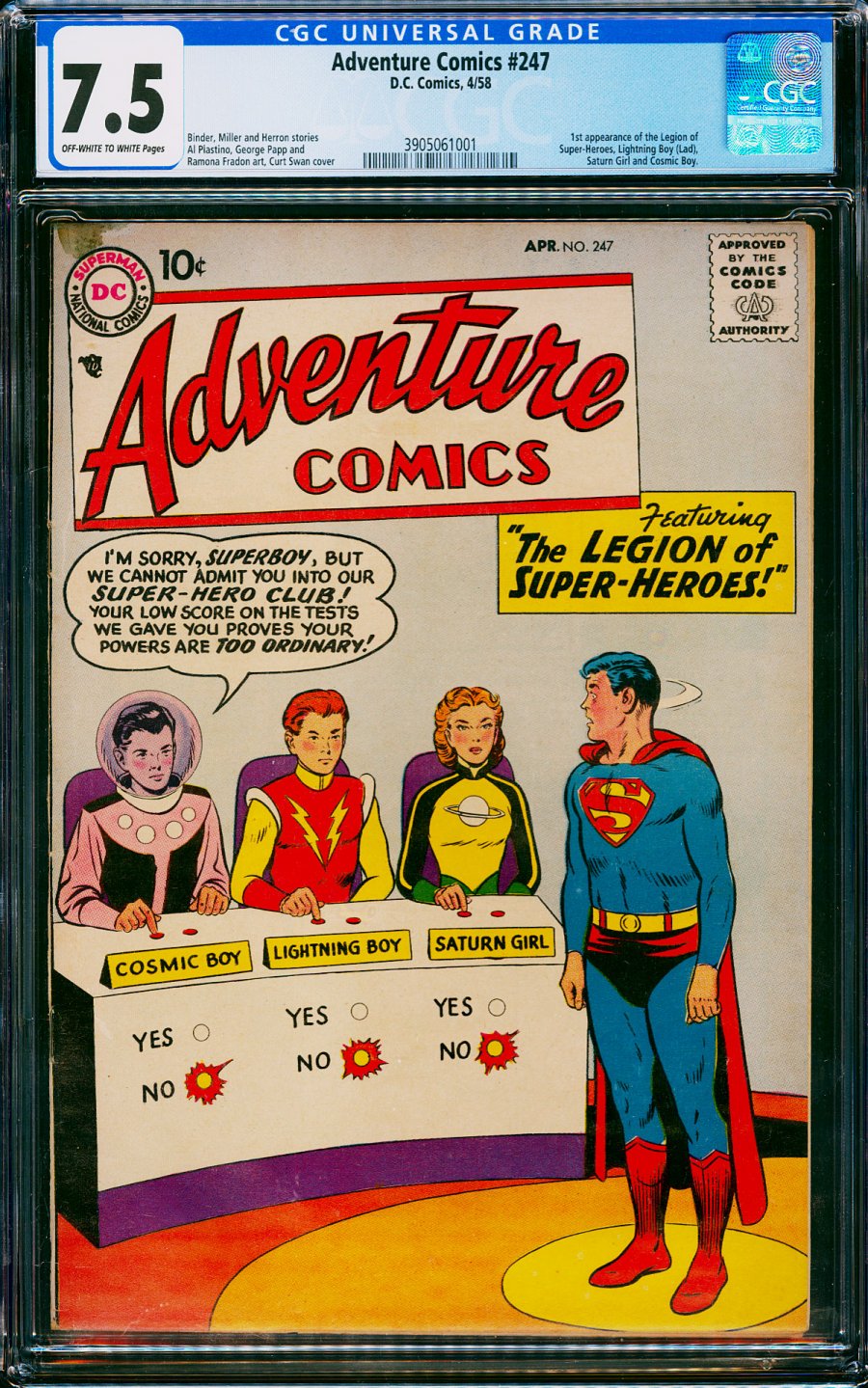 $13,150
Sold For
22
Bids
This auction has ended.
PUBLISHER: DC
COMMENTS: ow/w pgs
Curt Swan cover; 1st app. of the Legion of Super-Heroes; COMIC BOOK IMPACT rating of 9 (CBI)
Read Description ▼
Sell One Of These Inquire About This

Watch
ow/w pgs
Curt Swan cover; 1st app. of the Legion of Super-Heroes; COMIC BOOK IMPACT rating of 9 (CBI)Intended to be a one-off featuring Superboy, the Legion of Super-Heroes has gone on to become the focus of countless stories since its introduction. Adventure Comics #247 tells the tale of three time-traveling teenagers from the 30th century who are looking to recruit Superboy into their outfit. Cosmic Boy, Lightning Boy (later referred to as Lightning Lad), and Saturn Girl, sit with stern faces, claiming Clark Kent is "too ordinary" to join their group. The title story and accompanying statements by Cosmic Boy were just enough to entice young readers into finding out why Superboy was deemed so pedestrian. The curious plot-line in this issue would prove to become a benchmark for DC storytelling. The Legion returned several issues later for an encore and were adored by fans, subsequently, they appeared in issues of Action and Adventure Comics over the next few years. The continued success of the Legion proved that this story was not a throw-away Silver Age ploy, the group had staying power throughout the years, and most recently secured a reboot in the post-Infinite Crisis story line in 2007.

Devoted DC collectors know how difficult it is to find key issues of the early Silver Age, especially in higher grades, and Adventure Comics #247 is no exception. The price of this book has been rising exponentially over the past few years, so finding a copy in any state is indeed a rare accomplishment. While this comic has some minor condition issues, the wear is situated around the perimeter of the cover, leaving Superboy and his panel of judges much as the day they rolled off the printing press, fresh and bright. There are very few copies higher up the census than this VF- example, so we advise you to make a move on this classic collectible.