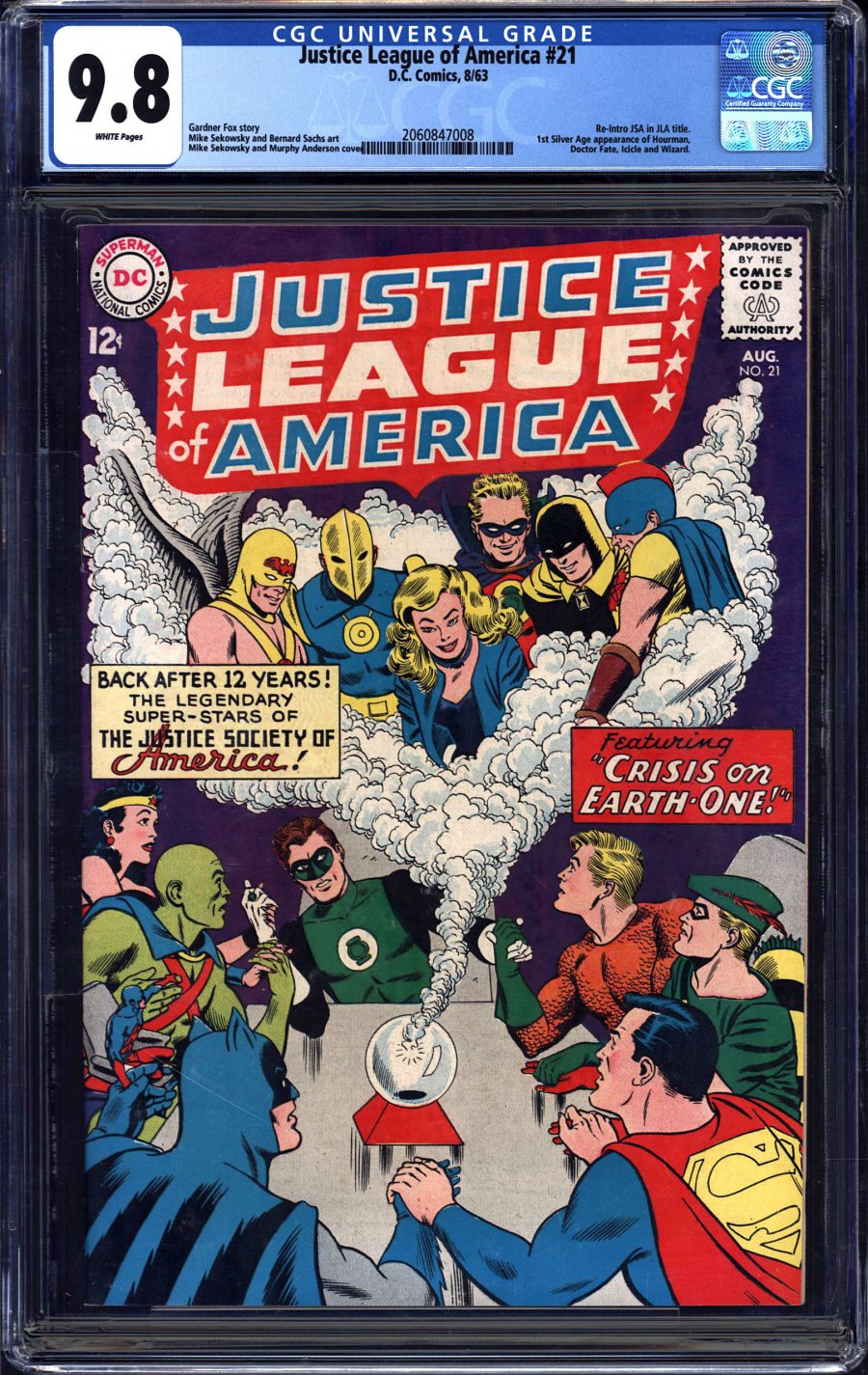 Watch
white pgs; 1 of 2 highest graded
classic Crisis on Earth-One; 1st Silver Age Doctor Fate, Hourman; re-intro Justice Society
Highest GradedIn Flash #123, DC established a plot device that would have far-reaching implications to the publisher’s universe (or universes, to be more accurate) and what began as a simple idea to unite a Golden Age hero with a Silver Age hero would evolve into one of DC’s central concepts, that of a Multiverse, separate worlds, coexisting simultaneously and accessible to both heroes and villains from the various locations. The idea was fleshed out with much greater depth in the pages of JLA, starting in the historically significant issue #21. The central plot of this issue is overly complex, as a team of bad guys from Earth One and Earth Two commit crimes and then flee to one another’s realms of existence to avoid culpability for their crimes. What ensues is a dizzying cat and mouse game that jumps back and forth between worlds as the regional hero teams attempt to bring the criminals to justice. Starring a jam-packed cornucopia of DC characters, the implications of the alternate universes would go on to bear plenty of fruit, the “Crisis” device would be revisited annually by DC for decades, eventually culminating in the Crisis on Infinite Earths series that would span several titles and storylines within the DC continuity, and the device continues to be employed into the modern era, but this is really where the concept began, making JLA #21 a popular collectible for serious DC mavens. The subject matter is ripe for the picking as the DCEU continues to develop and grow. A storytelling device that has long been a favorite part of the DC Universe for both fans and creators alike, tying together decades of comic book history and uniting heroes from every generation, DC’s multiverse has formed the backbone of the publisher’s output for decades. Justice League of America #21, from August 1963, re-introduced the JSA after years of absence and contained the first Silver Age appearances of Hourman, Doctor Fate, Icicle, and Wizard. "Crisis on Earth-One!" brought together the JSA and the JLA for the first time, which would pave the way for more DC Crises for years to come.

This copy earned a fantastic 9.8 CGC Universal Grade, with beautiful white pages, making it one of the two highest-graded copies of all time. In early 2020, a 9.8 copy sold for over $32,000. This is a gorgeous copy of a glorious piece of comic book history.