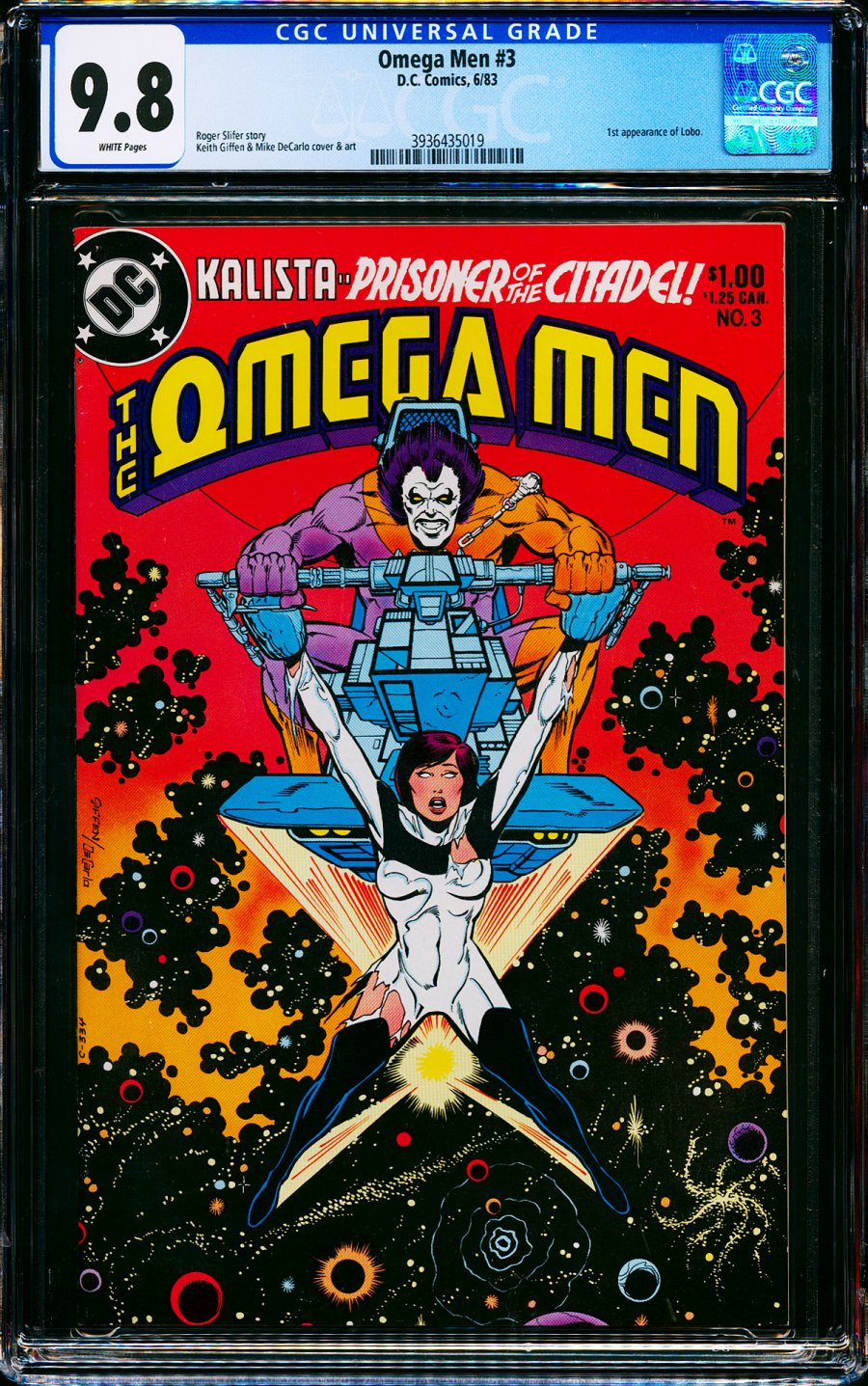 Auction Ends In
$110
Current Bid
5
Bids
NEXT MIN. BID: $120
FYI there's no need to include decimal points(.).
Bid Confirmation
You are about to submit a bid of . If you win this auction, you are legally obligated to purchase the book. Are you sure you want to continue?
Don't Show Again (except when higher than min. bid)
(No Reserve)
PUBLISHER: DC
COMMENTS: white pgs
Giffen cvr/art; 1st app. of Lobo
Highest Graded
Read Description ▼
Sell One Of These Inquire About This

Watch
white pgs
Giffen cvr/art; 1st app. of Lobo
Highest GradedOmega Men issue #3 presents the first appearance of Lobo, an alien interstellar mercenary and bounty hunter. In the beginning the character was envisioned as a villain but fans weren't initially receptive to him, ten years later writers reintroduced him as an anti-hero. Lobo was meant as a parody to the growing popularity of gritty, dark heroes such as the Punisher and Cable, which led to Lobo becoming incredibly popular in his own right, even becoming a favorite DC character of Marvel godfather Stan Lee. Originally Lobo was presented as clean cut with neatly trimmed hair but after his reimagining he was given a grungier hard rock look with a "space bike" to match, and is usually seen with a cigar in his mouth, taking inspiration from Marvel’s Wolverine. Like Superman, Lobo is the lone survivor of an extinct alien race, but unlike the flagship Kryptonian, Lobo is foul mouthed and ill-tempered yet still possesses a good heart. The bounty hunter often takes contracts that put him at odds with characters like Superman and the Justice League. After a well-received appearance in an issue of Justice League International Lobo became a regular for the DC comic LEGION and the spin-off series REBELS. Lobo has also made a number of animated TV and video game appearances with his first-ever live action role being on 2019's “Krypton.” Though each attempt at a Lobo feature film failed to materialize early on at WB, studio executives and producers are now ramping up for a movie after the mega-success of “Deadpool.” With his solo movie currently in development, fans can expect the popularity of Lobo to skyrocket in the coming years and the demand for this issue to drive up in value.