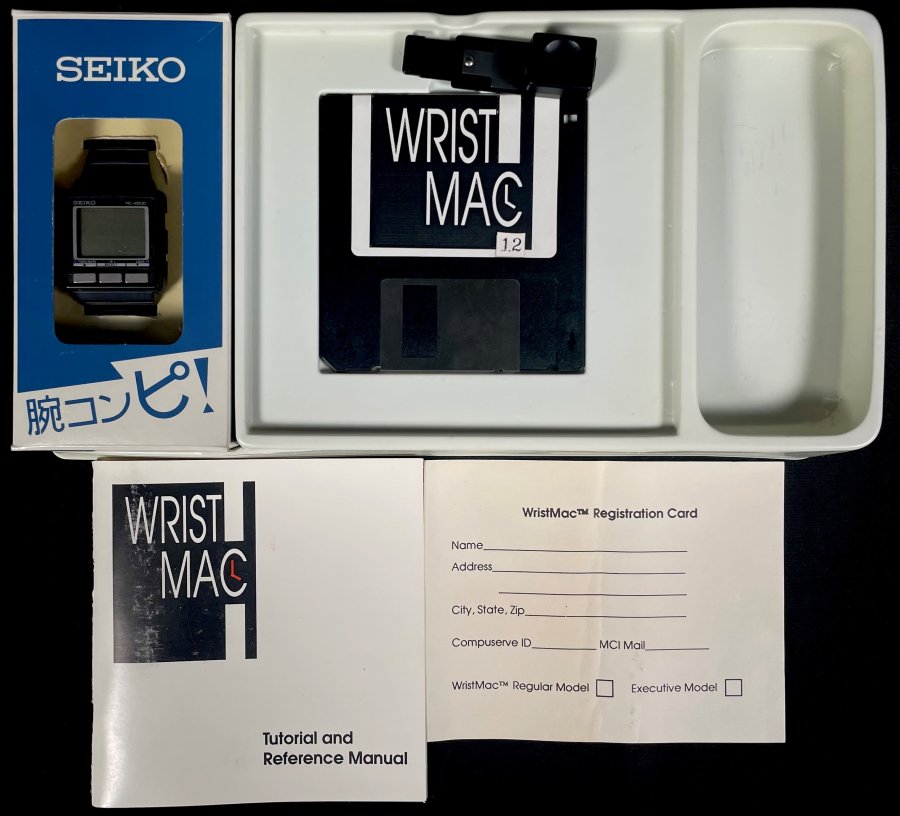 Auction Ends In
$2,077
Current Bid
35
Bids
NEXT MIN. BID: $2,127
FYI there's no need to include decimal points(.).
Bid Confirmation
You are about to submit a bid of . If you win this auction, you are legally obligated to purchase the book. Are you sure you want to continue?
Don't Show Again (except when higher than min. bid)
(No Reserve)
PUBLISHER: SEIKO
COMMENTS: Complete in box; Includes original (opened) box, registration card, reference manual, software floppy disk, packaging, and unopened Seiko WristMac watch; Serial No. 70216
Extremely rare 1988 Seiko/Ex Machina WristMac; first Apple Watch (released in 1988 - over 25 years before 2015's Apple Watch!); One of the first pieces of wearable computing technology
Read Description ▼
Sell One Of These Inquire About This

Watch
Complete in box; Includes original (opened) box, registration card, reference manual, software floppy disk, packaging, and unopened Seiko WristMac watch; Serial No. 70216
Extremely rare 1988 Seiko/Ex Machina WristMac; first Apple Watch (released in 1988 - over 25 years before 2015's Apple Watch!); One of the first pieces of wearable computing technologyThis 1988 Wrist Mac comes in its original packaging and has never been sold in the over thirty years since its first release. The box advertises the revolutionary features of the watch, and contains the original sticker noting the Serial Number (70216). The box has been opened and shows little wear, retaining its original white appearance despite some stress. Inside, the box contains the original Wrist Mac Registration Card (never filled out!), the Wrist Tutorial and Reference Manual (complete with white pages and no writing inside it), the Wrist Mac 1.2 floppy disk containing the official Wrist Mac software, the Wrist Mac’s holder for stability when plugged into a computer, and the original Seiko box containing the WristMac itself in pristine condition, with its original cables. This is an extremely rare and obscure piece of tech history, and an incredible find for collectors, investors, and Apple fans. It has rarely been seen since its inception over 30 years ago, and it will likely be years before another one comes to auction anywhere. This is a can’t-miss piece of computer history.
In 1988, Ex Machina, Inc. and Seiko came together to release the Wrist Mac, a programmable watch that connected to a Macintosh computer. The Wrist Mac could store telephone numbers, set alarms for both one-time use and recurring daily and weekly uses, and take notes, which could then be exported to a disk as a text file.