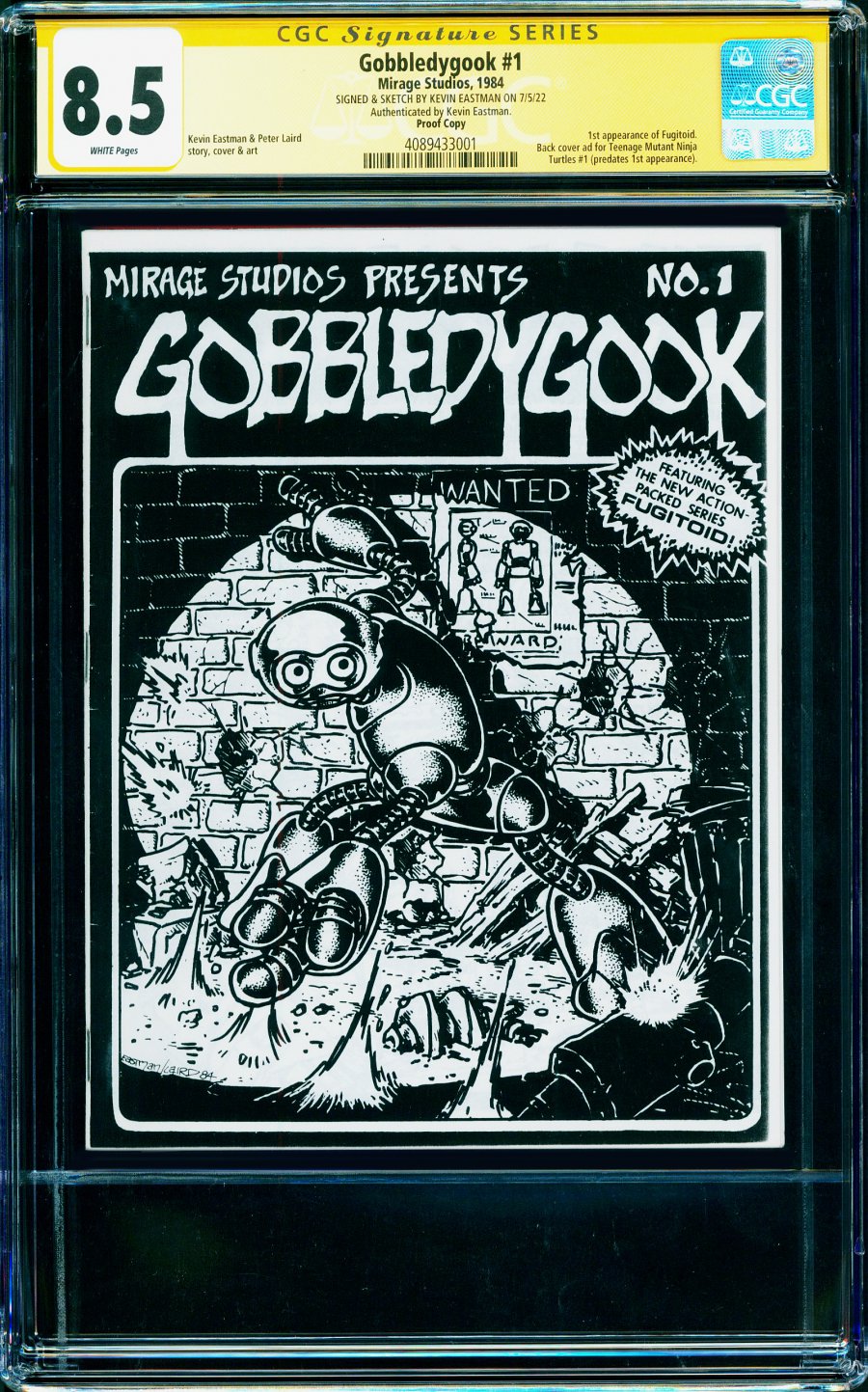 Auction Ends In
$2,600
Current Bid
16
Bids
NEXT MIN. BID: $2,700
FYI there's no need to include decimal points(.).
Bid Confirmation
You are about to submit a bid of . If you win this auction, you are legally obligated to purchase the book. Are you sure you want to continue?
Don't Show Again (except when higher than min. bid)
(No Reserve)
PUBLISHER: Mirage
COMMENTS: A 15% BUYER'S PREMIUM WILL BE ADDED TO THIS ITEM AT CONCLUSION OF THE AUCTION
white pages; Proof Copy; Kevin Eastman Signature Series w/sketch
VERY RARE!! Less than 5 'prototype' proof copies exist of each issue!
Quentin Eastman Collection
Read Description ▼
Sell One Of These Inquire About This

Watch
A 15% BUYER'S PREMIUM WILL BE ADDED TO THIS ITEM AT CONCLUSION OF THE AUCTION
white pages; Proof Copy; Kevin Eastman Signature Series w/sketch
VERY RARE!! Less than 5 'prototype' proof copies exist of each issue!
Quentin Eastman CollectionGobbledygook was an early 1984 Mirage Studios production, a homemade black and white comic co-created by Kevin Eastman & Peter Laird, featuring the 1st appearance of Fugitoid, the fugitive android, a classic Eastman/Laird character that would go on to have his own series and star in other Mirage and TMNT media. Even more significantly, Gobbledygook #1 featured a back cover ad for Teenage Mutant Ninja Turtles #1 before the comic’s release, making this the first true appearance of the team. As a small-press book with a print run of only 50 copies, this is an extremely rare and historic publication. Without Gobbledygook #1, there is no Teenage Mutant Ninja Turtles #1, and none of the countless books inspired by the success of the Turtles. As a homemade creation, all copies must be personally verified by Kevin Eastman, and the production process involving individual Xeroxing and stapling makes high-grade copies incredibly rare.

*Quentin was very close to us in the early days of working on the first issue (he's the one who originally loaned us the money to print TMNT #1) and books from before the first issue like the Gobbledygooks - he also sold art supplies and could give us a great discount, so he would stop by pretty regularly.”

So, in this situation, I recall that Peter and I tried a few different prototypes of Gobbledygook before we arrived at the ones that were CGCed in the past - (which was a press run of 50 copies for each issue) - in fact, I have one of the three copies ever created of an 8 1/2 x 11 version of issue #1 - Pete has the other and a collector named Chuck Costas has one I sold him.”

For the two that Quentin submitted - these were a set of less than five created as prototypes, like a "press proof" so Peter and I could test how the pages came together, and for the stapling, and final details like that.”

The final word here, in consideration of all of the above, the copies Quentin had and submitted would have been copies Peter and I gave him personally - and I would label them as "prototypes/press proofs" of Gobbledygook issue #1 and #2. Further, outside of Quentin, I would guess Pete might have some additional copies of these but couldn't say for sure. I do not have a set of these personally.”