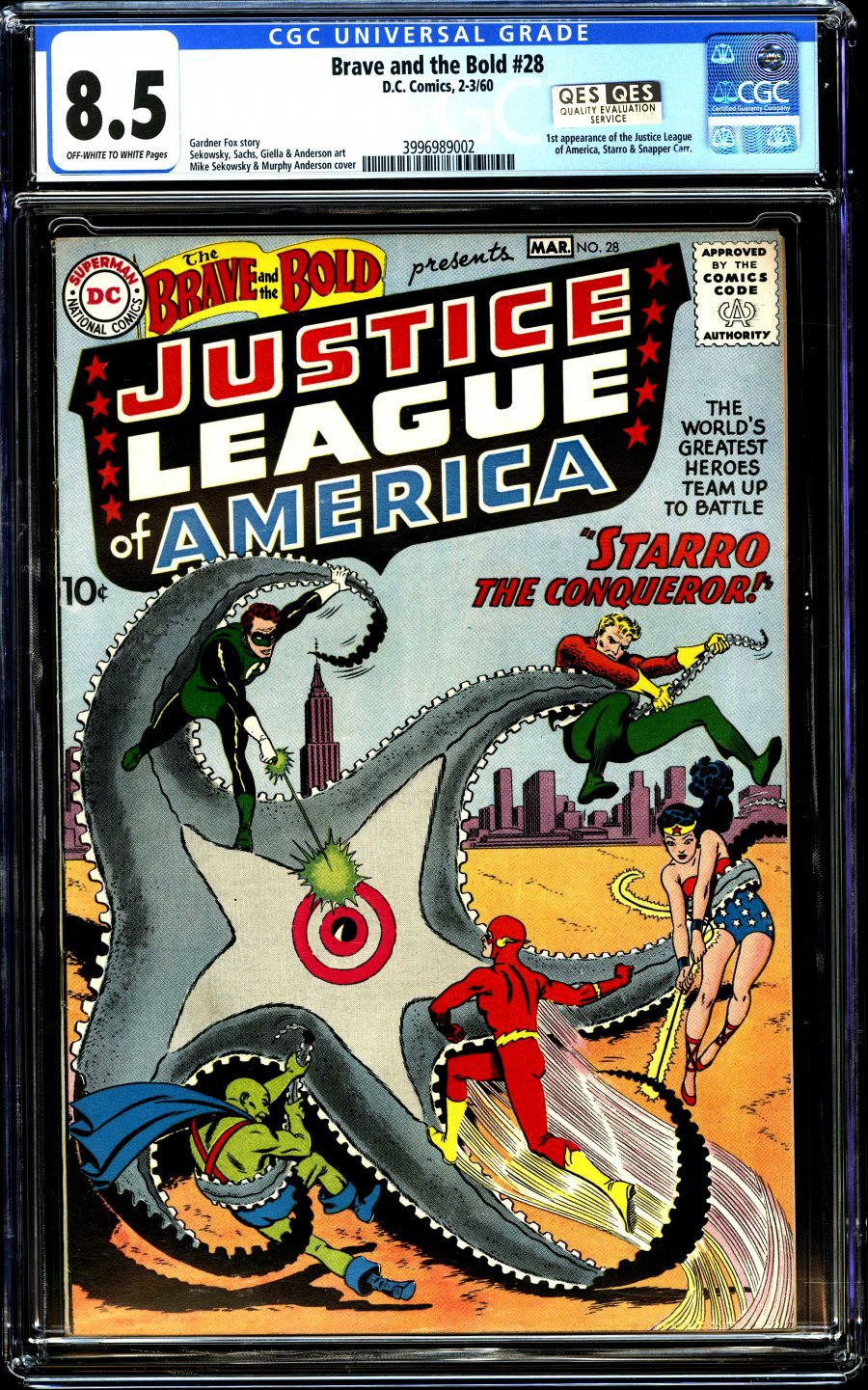 $40,250
Sold For
20
Bids
This auction has ended.
PUBLISHER: DC
COMMENTS: A 15% BUYER'S PREMIUM WILL BE ADDED TO THIS ITEM AT CONCLUSION OF THE AUCTION
ow/w pgs; QES Certified: impressive prime focal area + glossy + deep color strike
1st appearance of the Justice League of America, Starro, and Snapper Carr (2-3/60)
Read Description ▼
Sell One Of These Inquire About This

Watch
A 15% BUYER'S PREMIUM WILL BE ADDED TO THIS ITEM AT CONCLUSION OF THE AUCTION
ow/w pgs; QES Certified: impressive prime focal area + glossy + deep color strike
1st appearance of the Justice League of America, Starro, and Snapper Carr (2-3/60)In the Golden Age of comics, National Periodicals (later to become DC) stuffed their most popular characters into a team title, All Star Comics. Not long after the debut of the Justice Society, however, DC editors crafted new material for All Star, with each hero having a solo chapter adding up to a major storyline. When Julius Schwartz struck pay-dirt with the Silver Age hero revival, he tasked Gardner Fox with revamping the Justice Society concept in the serial title The Brave and the Bold, and the result was this instant smash hit, which gathered all the major revival heroes into one fantastic title, finally dispensing the anthology format of All Star in favor of a streamlined action comic full of pop and power. Readers responded enthusiastically to this debut performance, leading to a great scarcity of this issue in higher grades.


The Brave and the Bold began as a comic that was a repository for new concepts, with DC editors, writers, and artists throwing out ideas left and right and introducing characters like the Silver Age Flash and Green Lantern, Metal Men, Suicide Squad, Teen Titans, and even the iconic Justice League of America. This QES-certified copy of B&B #28 carries an 8.5 CGC Universal Grade, with off-white to white pages. This is an impressive book that features the classic JLA teaming up to fight the alien Starro, a historic DC villain, who recently appeared in 2021’s “The Suicide Squad.” The Justice League of America inspired the creation of the Fantastic Four, and later the Avengers, leading to the superhero team-up frenzy we are seeing play out on the silver screen today. A 9.0 Brave and the Bold #28 recently sold for $49,200. Iconic key issues like this only become scarcer and more in demand over time.