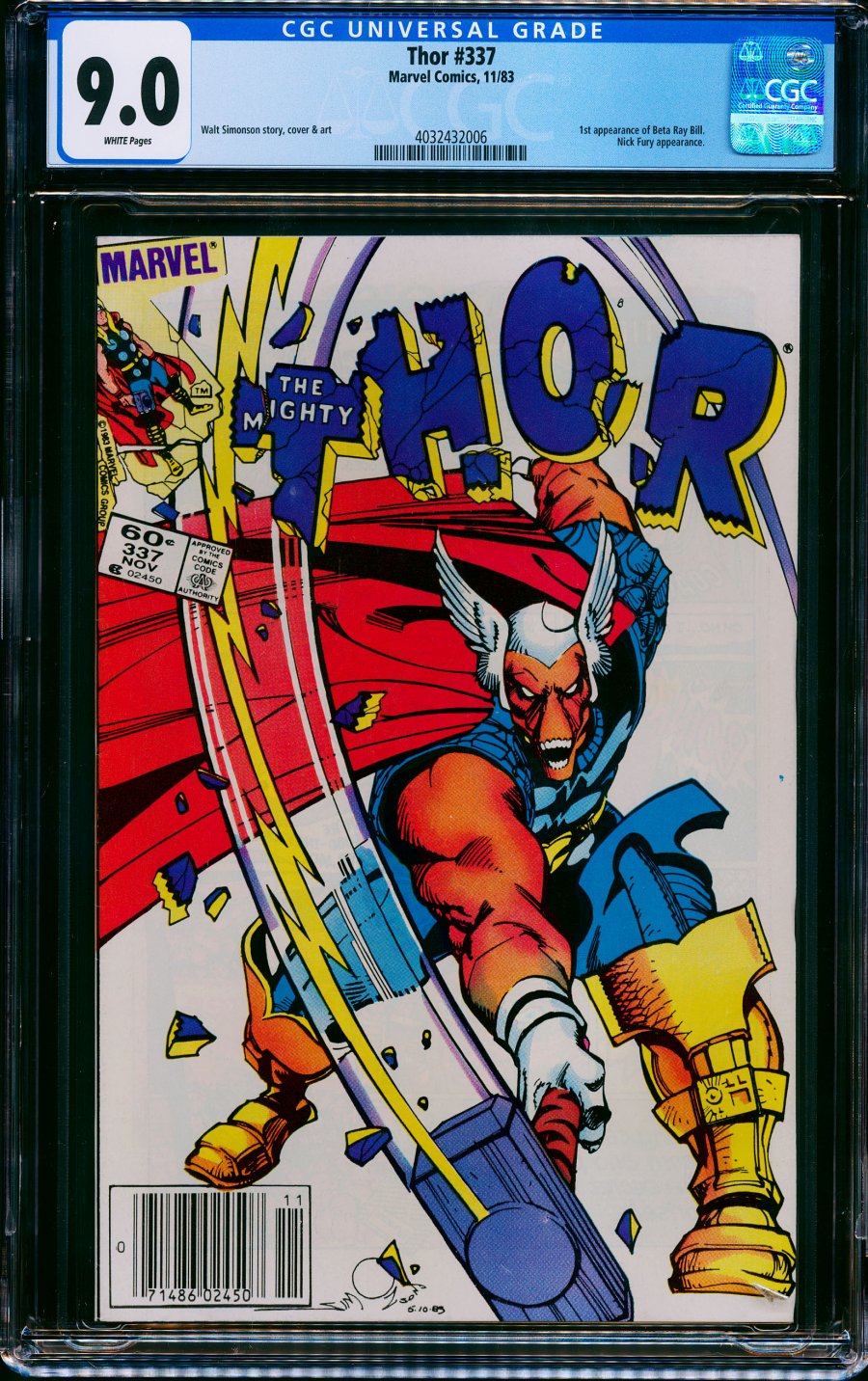 $126.50
Sold For
18
Bids
This auction has ended.
PUBLISHER: Marvel
COMMENTS: A 15% BUYER'S PREMIUM WILL BE ADDED TO THIS ITEM AT CONCLUSION OF THE AUCTION
white pages; Newsstand Edition
Simonson story cvr/art begins; 1st app. Beta Ray Bill
Read Description ▼
Sell One Of These Inquire About This

Watch
A 15% BUYER'S PREMIUM WILL BE ADDED TO THIS ITEM AT CONCLUSION OF THE AUCTION
white pages; Newsstand Edition
Simonson story cvr/art begins; 1st app. Beta Ray Bill“Whosoever holds this hammer, if he be worthy, shall wield the power of THOR!” and for over twenty years no other characters outside Marvel’s Norse mythology could ever lift the enchanted hammer. Enter Beta Ray Bill who makes his first appearance here in Thor #337, who not only lifts the hammer but battles Thor for control of it as an equal. Created by Walt Simonson, Beta Ray Bill is an alien of the Korbanite race who was created specifically to look like a monster. Simonson wanted Bill's design to make the character appear as though he was a bad guy, but in fact the truth was quite the opposite, Bill turns out to be the noble protector of his race. In their first encounter, both Bill and Thor mistake each other for hostiles then battle to a standstill which ends with Bill picking up Mjolnir and recognizing it as an extremely powerful weapon. After a brief contest over who controls the hammer, Odin, King of Asgard, deems Beta Ray Bill an honorable warrior and grants him his own magic hammer known as Stormbreaker. Bill has been a fan favorite character since his introduction and subsequently featured in numerous Marvel licensed animated shows, toys, and video games. Fans will notice Stormbreaker recently made its cinematic debut in “Avengers: Infinity War” and while Beta Ray Bill himself has yet to make a full appearance in the MCU, he has made a cameo in 2014's “Guardians of the Galaxy.” With plans to expand on the Thor franchise, no doubt the MCU has Beta Ray Bill scheduled for an appearance, which will effectively drive up the value of this premiere issue.