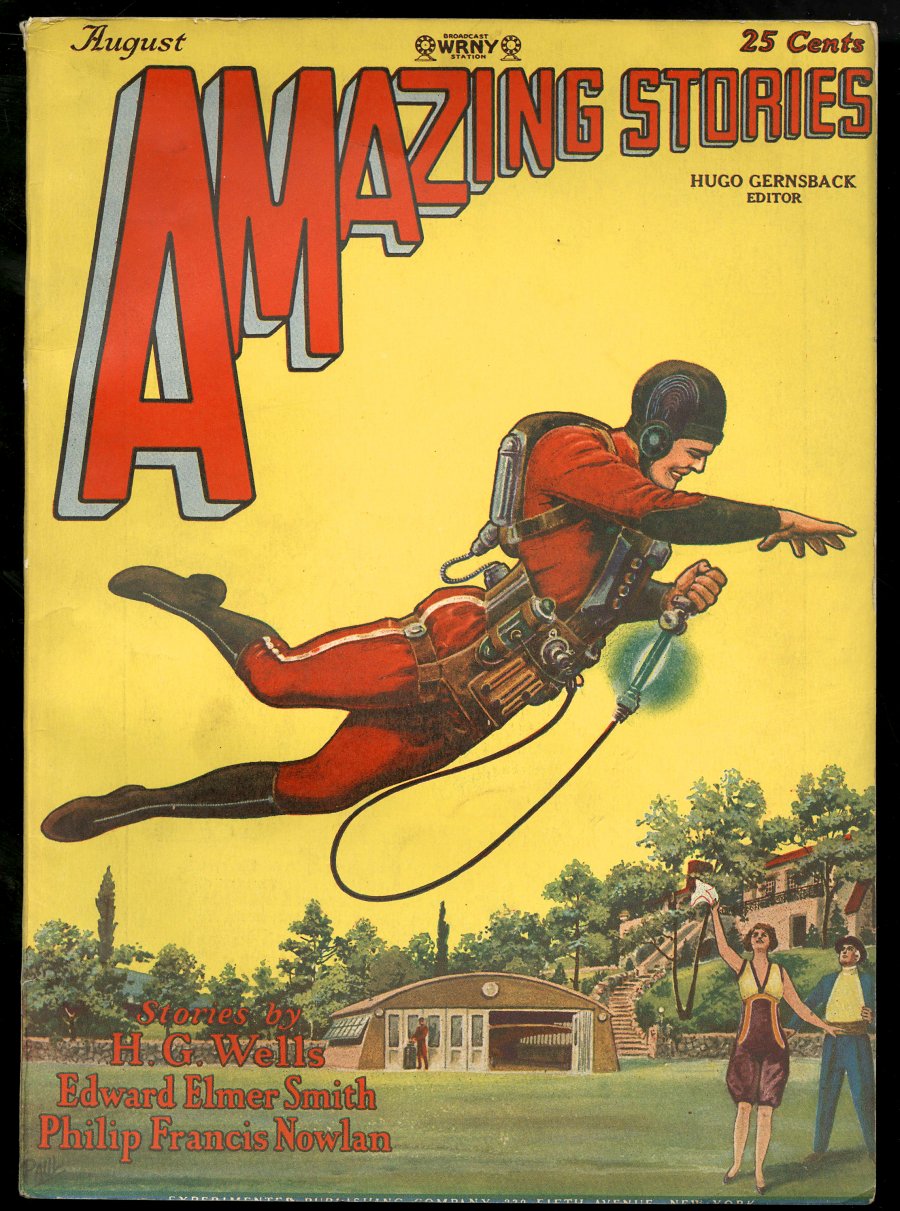 Auction Ends In
$1,750
Current Bid
41
Bids
NEXT MIN. BID: $1,800
FYI there's no need to include decimal points(.).
Bid Confirmation
You are about to submit a bid of . If you win this auction, you are legally obligated to purchase the book. Are you sure you want to continue?
Don't Show Again (except when higher than min. bid)
(No Reserve)
PUBLISHER: Experimenter/Ziff-Davis
Read Description ▼
Sell One Of These Inquire About This

Watch
August, 1928; 1st ever appearance of Buck Rogers in any format ("Armageddon 2419" - Philip Francis Nowlan); "Skylark of Space" - 1st published story by E.E. 'Doc' Smith (1/3, Paul cvr is the Skylark of Space, not Buck Rogers)
ow/crm pgs; sharp complete spine w/ minor stress at top; includes all coupons; beautiful copy
A 15% BUYER'S PREMIUM WILL BE ADDED TO THIS ITEM AT CONCLUSION OF THE AUCTIONThis early bedsheet issue of Amazing Stories from August 1928 introduced the world to the long-running fan-favorite sci-fi character Buck Rogers. The space opera hero would go on to star in countless other mediums including radio dramas, comic strips, serials, TV shows, movies, books, and more, still appearing in new content up to the modern day. A decade before Batman and Superman, Buck Rogers showcased the immense impact heroes could have on popular culture. Despite appearing in only two pulps, Buck Rogers is one of the characters people think of first when they ponder on the medium. The character is even credited with popularizing the idea of space exploration, a major turning point in the history of science-fiction.

Philip Francis Nowlan first introduced his everlasting creation in the story “Armageddon 2149” in this issue. This book also boasts an iconic Frank Paul cover, depicting Doc Smith's Skylark of Space, not Buck Rogers, as viewers often surmise. Despite being nearly 95 years old, this book continues to influence pop culture to this day. Recently, award-winning comic-book writer Brian K. Vaughan signed on to write an upcoming Buck Rogers TV series, with rumors of George Clooney assuming the lead role. A book this rare and of this vintage can only become more valuable over time, especially if a new generation falls in love with Buck Rogers all over again.

Considering that this pulp was printed 94 years ago, it remains in an excellent state of preservation. Many pulps with less historical value have deteriorated to the point of fragility that one is afraid to lay hands on them lest they turn into dust. Seeing as how this 7.5 example has retained its wonderfully sunny color scheme, with strong yellow and red tones, and the perimeter of the cover shows few flaws, this is quite a find. Another copy of this same issue sold for a hefty sum in our recent pulp auction and we expect to see a similar battle royale over ownership of Buck Rogers’ first-ever appearance, a pop culture sensation that is once again poised to thrill a new generation of fans.