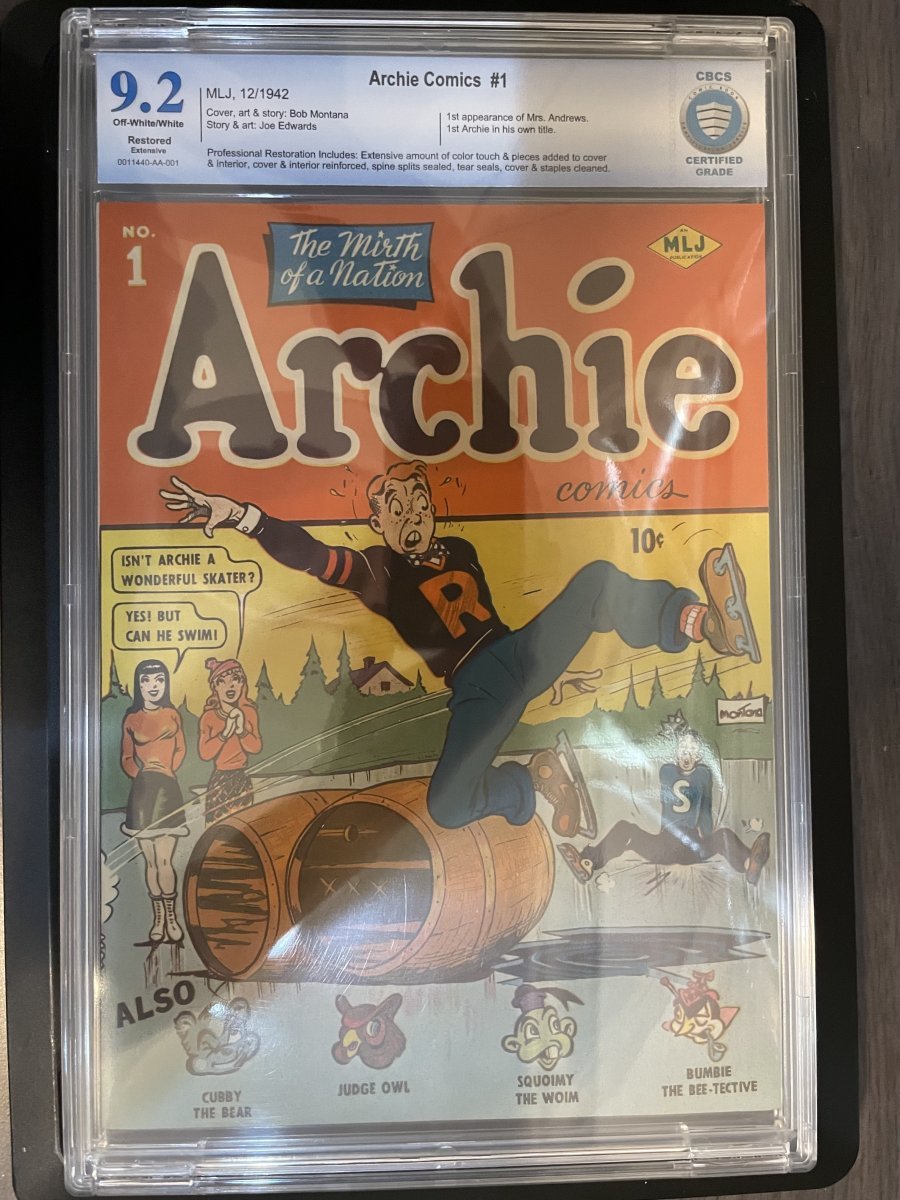 --
Accepting Offers
--
Offers
FYI there's no need to include decimal points(.).
Offer Confirmation
You are about to submit an offer of . If accepted, you are legally obligated to purchase the book. Are you sure you want to continue?
FYI there's no need to include decimal points(.).
Buy Confirmation
You are about to buy this item for , and will be legally obligated under the terms of our User Agreement to pay for it in a timely fashion. Continue?
PUBLISHER: Archie Publications
COMMENTS: Off-White to White pgs; Census Rank 1 Highest Graded; Restored holder; Extensive Professional Restoration
Bob Montana cvr/art; 1st app. Mrs. Andrews (Winter 1942)
Read Description ▼
Sell One Of These Inquire About This

Watch
Off-White to White pgs; Census Rank 1 Highest Graded; Restored holder; Extensive Professional Restoration
Bob Montana cvr/art; 1st app. Mrs. Andrews (Winter 1942)Some elements of American pop culture transcend time or place and become iconic, as though they were always there. Archie Andrews, the quintessential American teen, and his friends, Jughead, Reggie, and especially Betty and Veronica, have spent over seven decades portraying the ups and downs of teenage life. Their stories prove as durable and identifiable for audiences today as when they first appeared on newsstands. Archie quickly took over the hero anthology Pep Comics shortly after his first appearance and was promptly given his own title, thereby sealing his status as the top teen comedy star. Despite an enormous print run, Archie Comics #1 has survived in astonishingly low numbers and top tier Archie collectors are notoriously known as the "black holes" of the collecting community, as once they're in a collection, they're never to be seen again. Archie Comics #1 is likely the single most-difficult major Golden Age key to obtain after Pep Comics #22, Archie's first appearance. One of the most demanded and revered of comic book keys, this book never fails to elicit excitement when copies surface at auction.