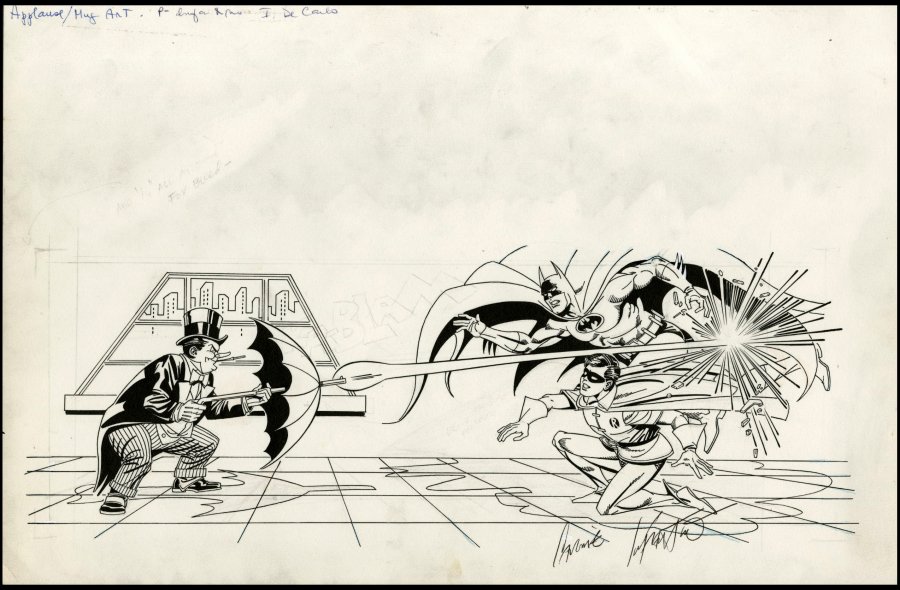 Auction Starts In
$1
Starting Bid
--
Bids
NEXT MIN. BID: $1
FYI there's no need to include decimal points(.).
Bid Confirmation
You are about to submit a bid of . If you win this auction, you are legally obligated to purchase the book. Are you sure you want to continue?
Don't Show Again (except when higher than min. bid)
(No Reserve)
PUBLISHER: Applause
COMMENTS: Carmine Infantino pencils/Mike DeCarlo inks; Illustration for collectors mug; 1989; image size 15.5" x 5.75"
Read Description ▼
Sell One Of These Inquire About This

Watch
Carmine Infantino pencils/Mike DeCarlo inks; Illustration for collectors mug; 1989; image size 15.5" x 5.75"Great illustration by Infantino that was used on a collectors mug in 1989, otherwise known as the year of Batman. Classic Infantino imagery of the Penguin using one of his trick umbrella's on the Dynamic Duo, beautifully illustrated by one of DC's legendary creators. Pen and ink. Art is in excellent condition. Signed by Infantino.
Artist Information