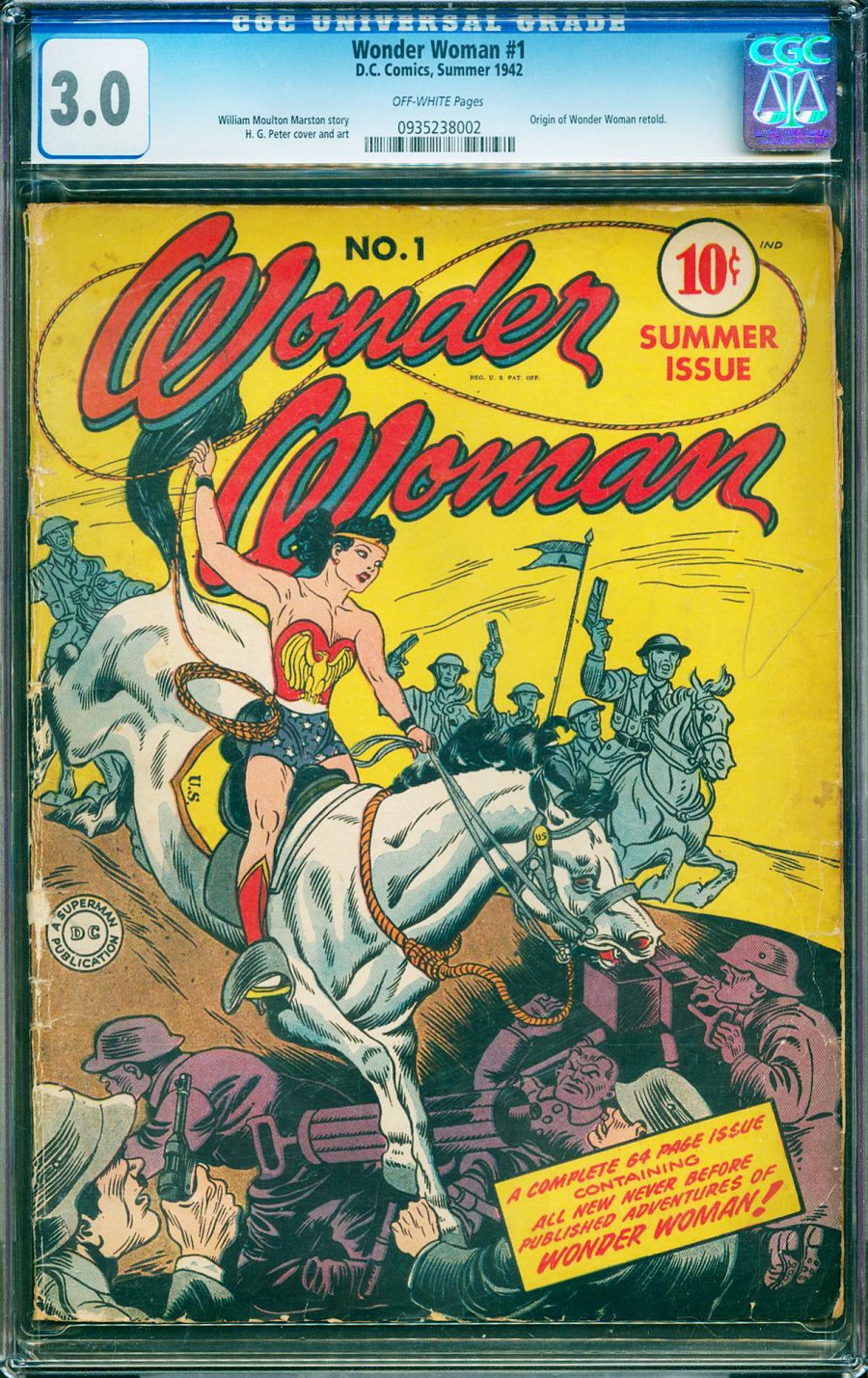 $29,900
Sold For
27
Bids
This auction has ended.
PUBLISHER: DC
COMMENTS: A 15% BUYER'S PREMIUM WILL BE ADDED TO THIS ITEM AT CONCLUSION OF THE AUCTION
ow pgs
Marston story, H.G. Peter cvr/art; origin Wonder Woman retold
Read Description ▼
Sell One Of These Inquire About This

Watch
A 15% BUYER'S PREMIUM WILL BE ADDED TO THIS ITEM AT CONCLUSION OF THE AUCTION
ow pgs
Marston story, H.G. Peter cvr/art; origin Wonder Woman retoldWonder Woman was a vital addition to the superhero pantheon as William Moulton Marston's complex comic concept was one of the few Golden Age creations whose style and format were dead-on from the start, resulting in a nearly unbroken run of quality throughout the WWII-era. After her auspicious debut in All Star Comics #8, Wonder Woman earned her own book with Sensation Comics, the title that proved to be such a break-out success that DC introduced Wonder Woman #1 in the summer of 1942. This issue contains four tales of groundbreaking heroism, the first of which re-tells the character's origin story. There's been plenty of debate over the quality of some of the recent additions to the DCEU, but even the most cynical of hearts agree that Gal Gadot's portrayal of Wonder Woman was a knockout, and upcoming sequels will further serve to drive the value of this book. Early Wonder Woman comics are still heavily undervalued in our humble estimation which means that there is loads of headroom for these books to shoot up in value. Ever since the release of the DCEU’s “Wonder Woman,” all things having to do with the Amazon Princess have enjoyed a huge uptick in value. This comic, along with All Star #8 (Wonder Woman’s first appearance), and Sensation Comics #1 comprise the holy trinity of Wonder Woman books. This 3.0 copy has lasted through the ages and managed to retain its original impact. The central image of Diana is vivid, clean, and powerful. The grade of this comic will make it available to a lot of collectors who haven’t been able to score a copy of this important Golden Age key. There is another Wonder Woman movie currently in production making this a good time to invest before the inevitable price jump upon the film’s release.