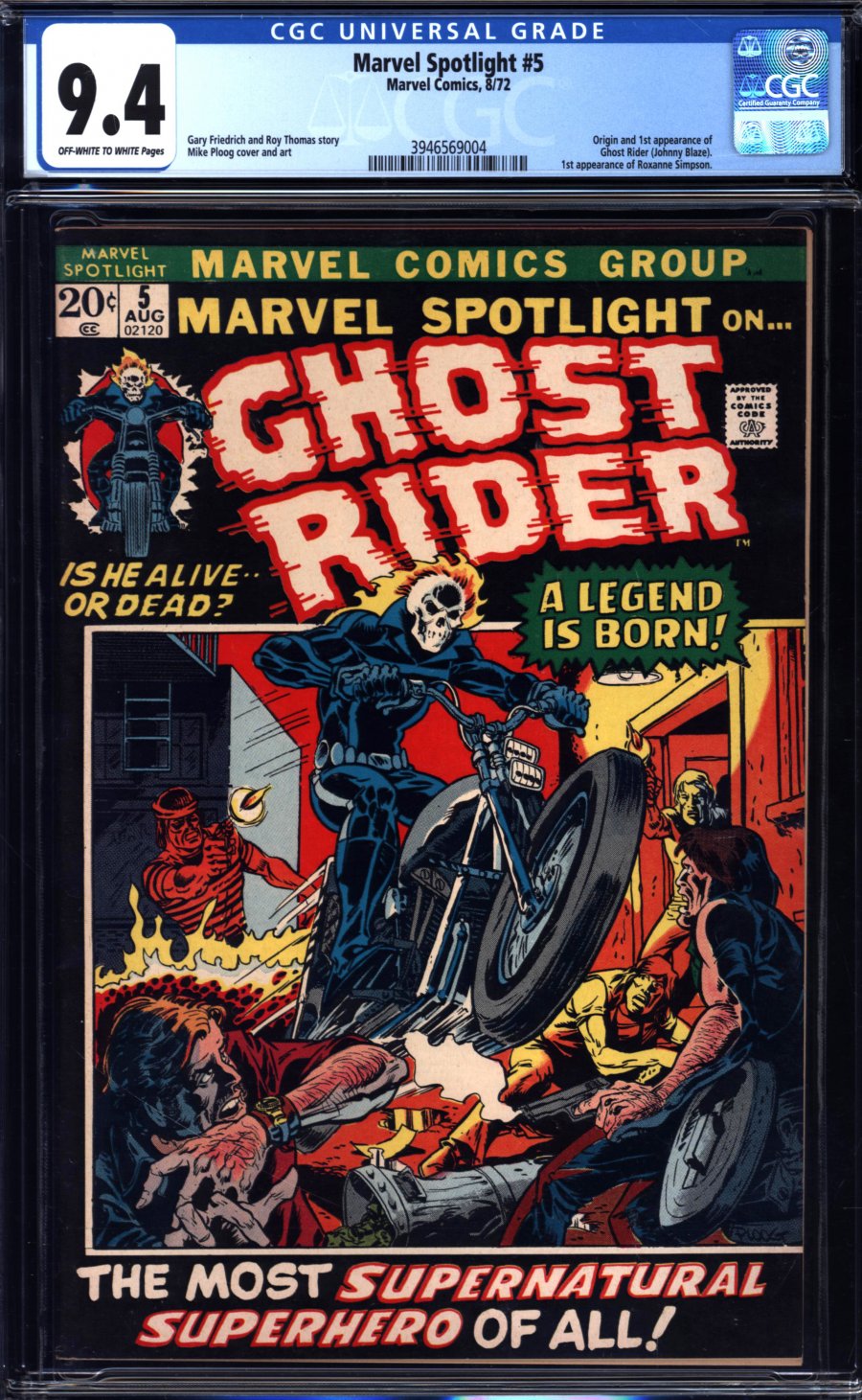 Watch
ow/w pages
origin and 1st app. Ghost Rider (Johnny Blaze) by Ploog; picture frame Marvel motorcycle cover; Comic Book Impact rating of 9 (CBI)Starting life back in the Golden Age, the character Ghost Rider was a Western hero who, cloaked in a white outfit and a matching mask, starred in horror-themed tales in Tim Holt and other Magazine Enterprises properties until the publisher let the trademark lapse. Dick Ayers, the original artist behind the cowboy iteration revived the character when he moved over to Marvel, who quickly snapped up rights to the name Ghost Rider. Reimagined in the early 70s as a motorcycle daredevil with a flaming skull, whose powers were granted from the Devil himself, the new-look Rider, Johnny Blaze, became an instant fan favorite and a popular superhero with lasting power. Marvel took full advantage of the loosening of the CCA’s ban on horror-based characters at the beginning of the decade, and none of their macabre new creations was more successful than Ghost Rider. Marvel Spotlight #5 provides the first appearance of the Johnny Blaze Ghost Rider, as well as his origin story, and is a popular Bronze Age key that is fairly easy to find on the market. Appearing in films, TV shows, video games, cartoons, and tons of comic reboots, this antihero has proven his lasting power and is all gassed up and ready for a return in the MCU.

Marvel Spotlight #5 introduced the world to Johnny Blaze and reinvented Ghost Rider for generations to come, making the issue one of the greatest keys of the Bronze Age. This copy earned a 9.4 CGC Universal Grade and has off-white to white pages. The central image of Johnny Blaze driving his motorcycle through a group of terrified gang members is beautifully crisp. Bronze Age Marvel keys have been skyrocketing in value in recent months. Marvel's horror heroes and villains of the 70s, including Ghost Rider, Blade, Dracula, Moon Knight, Werewolf by Night, and others are all in very high demand. The MCU has made countless characters into household names and transformed their first appearances into extremely desirable books. With rumors of a Ghost Rider reboot coming to the MCU soon, now is a great time to invest in this timeless classic.