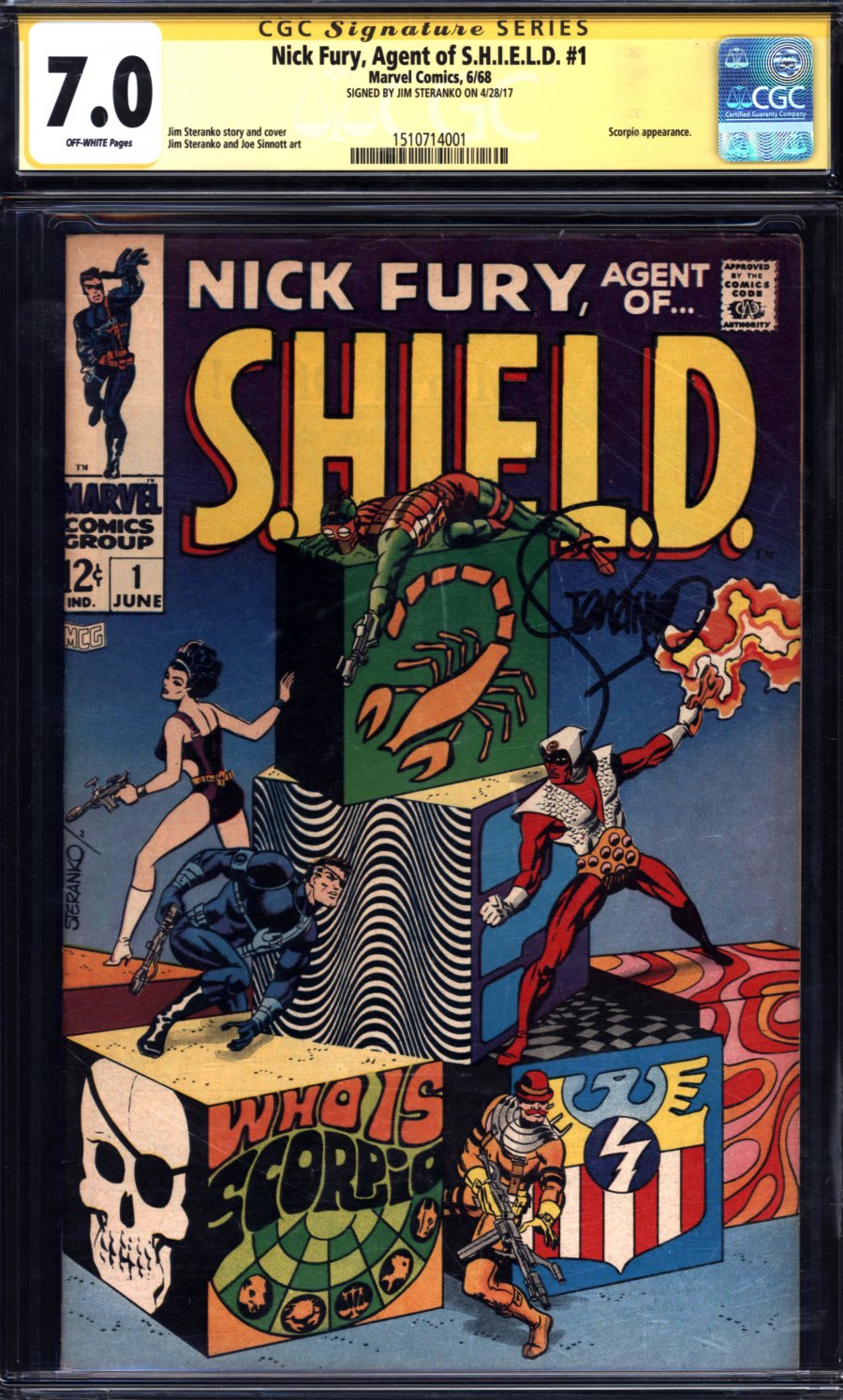 $234.60
Sold For
13
Bids
This auction has ended.
PUBLISHER: Marvel
COMMENTS: A 15% BUYER'S PREMIUM WILL BE ADDED TO THIS ITEM AT CONCLUSION OF THE AUCTION
ow pages; Jim Steranko Signature Series
1st app of Scorpio; Jim Steranko cover; Joe Sinnott inks.
Read Description ▼
Sell One Of These Inquire About This

Watch
A 15% BUYER'S PREMIUM WILL BE ADDED TO THIS ITEM AT CONCLUSION OF THE AUCTION
ow pages; Jim Steranko Signature Series
1st app of Scorpio; Jim Steranko cover; Joe Sinnott inks.Thanks to the Infinity Formula, which caused him to age at a much slower rate than most mortals, Nick Fury was able to continue his patriotic exploits well beyond his action in WWII with the Howling Commandos. Cashing in on the fever for James Bond and espionage heroes that ruled the roost in the mid-60s, the TV show, The Man From U.N.C.L.E., influenced Stan Lee to bring the cigar-chomping Fury back into the Marvel Universe, albeit, now a little older, sleeker, and at a higher rank. Introduced in the pages of Strange Tales, Nick Fury, Agent of S.H.I.E.L.D. would share the anthology book with Doctor Strange for thirty-three issues, before earning his own title. Inaugurated by Jack Kirby, the Strange Tales Nick Fury feature would then be passed on to the capable hands of Jim Steranko, who initially inked Kirby’s pencils, but soon took over at the primary artist, and soon ignited a firestorm of fandom for the spy thriller stories. Employing the psychedelic and pop art forms that were very popular in the decade, Steranko became an overnight sensation and quickly went on one of the most celebrated creative periods of the Silver Age. It was only a matter of time until Nick Fury would end up with his own title, which only enjoyed a short run of fifteen issues, but the series is now considered a milestone in the history of comics, breaking barriers between comic books and “art,” making the public take comics more seriously as an art form as not just a disposable entertainment for children and pre-teens. The first issue of Nick Fury’s solo title is entirely drawn, written, and colored by the tireless Steranko, who also composed the iconic cover design, and the incredible centerfold has to be seen to be believed. If one is interested in the rich history of the comic book form, this issue is one of the important comics that helped change the industry, expanding on what was acceptable in comics, while at once appealing to a new audience of readers and influencing everything that would come after its release.