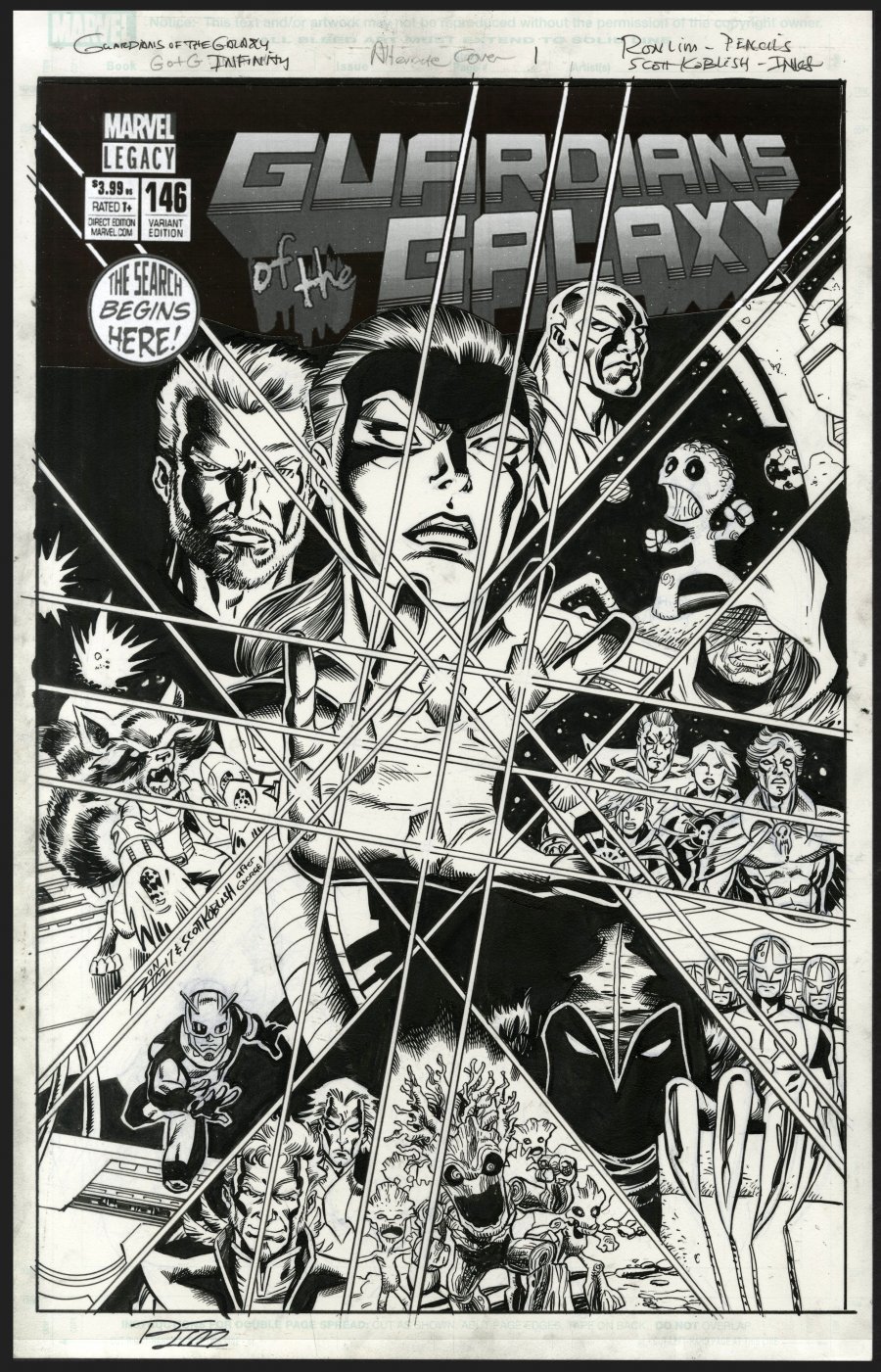 $4,485
Sold For
37
Bids
This auction has ended.
PUBLISHER: Marvel
COMMENTS: A 15% BUYER'S PREMIUM WILL BE ADDED TO THIS ITEM AT CONCLUSION OF THE AUCTION
Ron Lim Guardians of the Galaxy #146 Original Cover Art (Marvel Comics, 2018); image size 10.25" x 15.75"
Infinity Gauntlet #1 cover homage!
Read Description ▼
Sell One Of These Inquire About This


Twice published cover! Initially created as a special variant cover as a homage to George Perez’s iconic The Infinity Gauntlet #1 Cover Art (May 1991). The two covers were published (Jan 2018) to form a lenticular effect, with each cover image appearing separately dependent upon the viewer’s angle. Lim’s cover art was republished (Feb 2018) as the stand-alone 2nd print cover. Extraordinary!

The art is accomplished in ink over graphite on Bristol board, measuring approximately 11 1/4 x 17 inches, is signed, dated & paid tribute to George Perez by both artists in the lower left. The piece is signed a second time by Ron Lim in the lower left margin. The work is in excellent condition.

The title and other text elements are recreations on an acetate overlay.

Image of published cover is for reference only.

Ronald “Ron” Lim (born 1965) is an American comic book artist best known for his work for Marvel Comics, most particularly the Silver Surfer (vol. 3) series. His first published work was for the independent comic book; Ex-Mutants, which he worked on from 1986 to 1988. He was discovered by Marvel at a 1987 comic convention and was hired on the spot. Lim penciled the Silver Surfer (vol. 3) series from 1988-1994. He also penciled most of the “Infinity” trilogy which Marvel published in the early 1990s; Infinity Gauntlet (1991), Infinity War (1992) and Infinity Crusade (1993). He returned to these characters to pencil the Thanos series in 2004.

Scott Koblish (born 1970) is an American comic book artist best known for his work for Marvel Comics, most particularly Deadpool, Captain America, The Many Deaths of Scott Koblish, The Jet Pack Pets, Dr. Strange, The Avengers, Deadpool/Spider-Man, Final Crisis: Legion of Three Worlds, The Secret History of the War on Weed. He attended The Kubert School of Cartooning and Graphic Art when he was nine years old. He graduated from The School of Visual Arts in Manhattan with a BFA in Cartooning and Illustration.