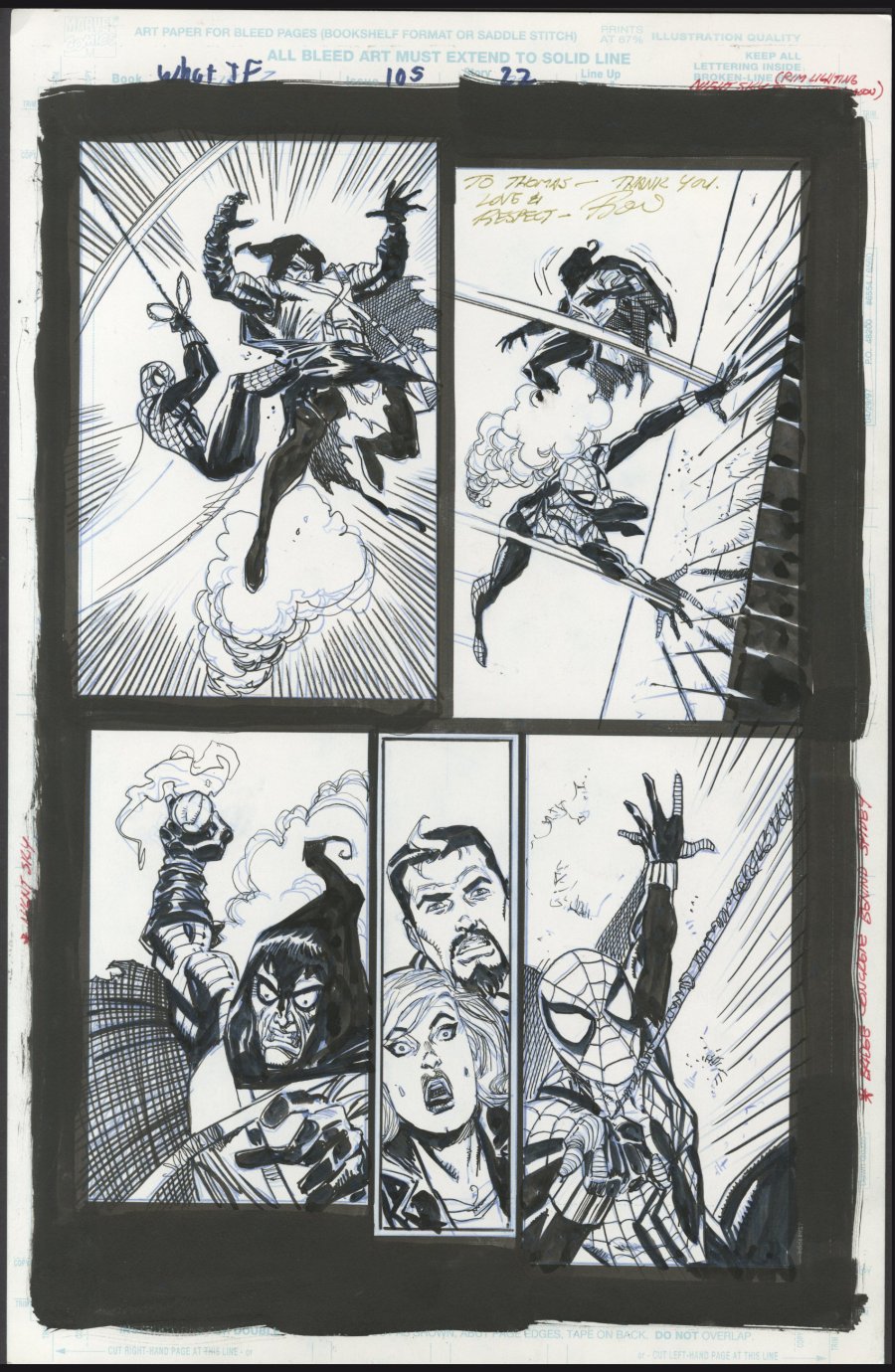 $10,580
Sold For
37
Bids
This auction has ended.
PUBLISHER: Marvel
COMMENTS: A 15% BUYER'S PREMIUM WILL BE ADDED TO THIS ITEM AT CONCLUSION OF THE AUCTION
Ron Frenz pencils/Bill Sienkiewicz inks; page 22; 1998; image size 10" x 15"
1st appearance of Spider-Girl (Mayday Parker)!
Tom DeFalco Collection
Read Description ▼
Sell One Of These Inquire About This

Watch
A 15% BUYER'S PREMIUM WILL BE ADDED TO THIS ITEM AT CONCLUSION OF THE AUCTION
Ron Frenz pencils/Bill Sienkiewicz inks; page 22; 1998; image size 10" x 15"
1st appearance of Spider-Girl (Mayday Parker)!
Tom DeFalco CollectionSpider-Girl (Mayday Parker) battles Green Goblin, while Peter and Mary Jane look on, from the introduction and first appearance of the character. Pen and ink. Art is in excellent condition. Signed and inscribed by Frenx.

Bill Sienkiewicz is an American artist, known for his work in comic books—particularly for Marvel Comics’ New Mutants, Moon Knight, and Elektra: Assassin. Sienkiewicz’s work in the 1980s was considered revolutionary in mainstream U.S. comics due to his highly stylized art that verged on abstraction and made use of oil painting, photorealism, collage, mimeograph, and other forms generally uncommon in comic books. Sienkiewicz was born May 3, 1958, in Blakely, Pennsylvania. When he was five years old, he moved with his family to the Hainesville, New Jersey section of Sandyston Township, New Jersey, where he attended elementary and secondary school. Sienkiewicz began drawing “when he was about four or five” and continued doing and learning about art throughout his childhood. His early comic book influences include artist Curt Swan Superman comics, and artist Jack Kirby’s Fantastic Four. Sienkiewicz received his classical art education at the Newark School of Fine and Industrial Arts in Newark, New Jersey. After art school, he showed a portfolio of his work to DC Comics’ art director Vince Colletta, which led to his entering the comics field at age 19. The artist recalled in 1985; “They didn’t have any work for me, but that didn’t bother me. I just figured that if comics didn’t work out I’d have done advertising or illustration. Vinnie called [renowned comics and advertising artist] Neal Adams, who put me in touch with [Marvel Comics editor-in-chief] Jim Shooter. Soon after that I was drawing Moon Knight, in The Hulk [black-and-white comics] magazine.” His early art style was heavily influenced by Neal Adams. Sienkiewicz continued as the artist of the Moon Knight color comics series, starting with the first issue (November 1980). His eclectic art style helped shed the early perception of Moon Knight as a mere Batman clone. Four years later, after a stint as artist on the Fantastic Four, he became the artist on Marvel’s X-Men spin-off New Mutants, beginning with issue No. 18 (August 1984), producing cover paintings and character designs. From this period on, Sienkiewicz’s art evolved into a much more expressionistic style, and he began experimenting with paint, collage and mixed media. He illustrated New Mutants from 1984 to 1985. Sienkiewicz produced covers for a range of Marvel titles, including Rom, Dazzler, The Mighty Thor, Return of the Jedi and The Transformers. He also created the comic adaptation of Dune. Sienkiewicz’s own first writing credit was for the painted story “Slow Dancer” in Epic Illustrated in 1986. Sienkiewicz both wrote and illustrated the 1988 miniseries Stray Toasters, an idiosyncratic work published by Epic Comics about a criminal psychologist investigating a series of murders. His first major interior work for DC Comics was contributing to Batman #400 (October 1986). He illustrated the 1986-87 eight-issue Elektra: Assassin limited series and the Daredevil: Love and War graphic novel which were both written by Frank Miller.