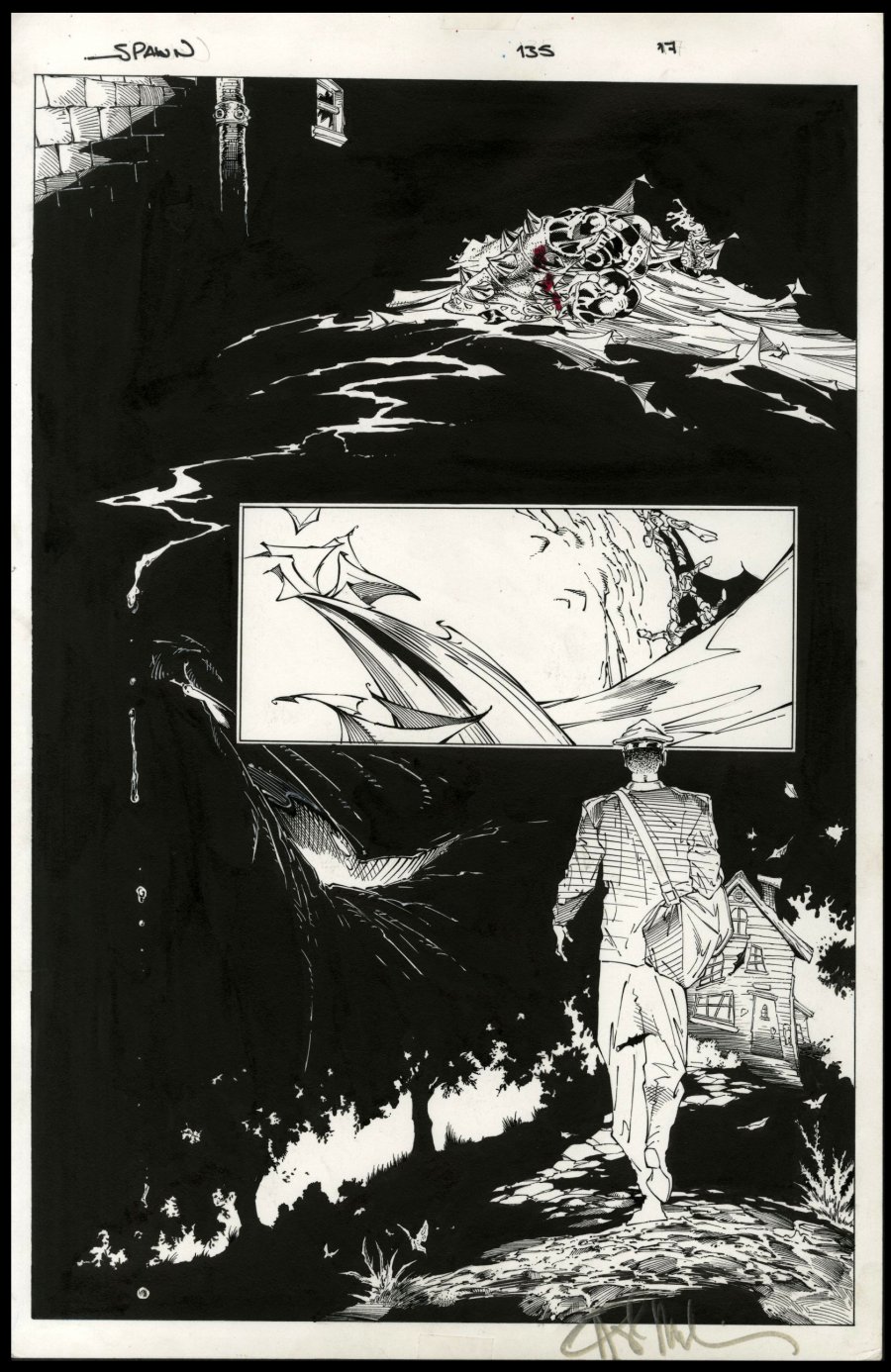 $330.05
Sold For
15
Bids
This auction has ended.
PUBLISHER: Image
COMMENTS: A 15% BUYER'S PREMIUM WILL BE ADDED TO THIS ITEM AT CONCLUSION OF THE AUCTION
Angel Medina and Crimelab Studios Spawn #135 Original Splash Art – Story Page 17 (Image, 2004); image size 10.25" x 15.5"
From the Modern Age of Comics – Original comic art of “Spawn”
Read Description ▼
Sell One Of These Inquire About This

Watch
A 15% BUYER'S PREMIUM WILL BE ADDED TO THIS ITEM AT CONCLUSION OF THE AUCTION
Angel Medina and Crimelab Studios Spawn #135 Original Splash Art – Story Page 17 (Image, 2004); image size 10.25" x 15.5"
From the Modern Age of Comics – Original comic art of “Spawn”Splash with close-up inset of Spawn. “And through the wide green fields of memory, a hero returns home.” The art was published (May 2004) as an interior Splash, Page 17, to the story “A Thousand Clowns, Part 2.”

The art is accomplished in ink over graphite on heavy board and measures approximately 11 x 17 inches. The artist has signed the work in the lower right in gold ink. The art is in excellent condition, there is a minor red mark in the Spawn figure.

The Story: “A Thousand Clowns, Part 2”
The Violator has Spawn tied up with a thorned crown on his head in the Dead Zone. Spawn lays battered and unable to recover due to the Dead Zone’s neutralizing effects on his powers. One of the Clown’s followers gets too close and Spawn grabs him and threatens to kill him if he is not released. Violator laughs and cuts the man’s head off. He orders his followers to grab the man and throw him on the dinner table for food. He has all of his followers throw food at Spawn and ridicule him. Without his powers he grows weak from the abuse.

Images of the published page and cover are for reference only.

Angel Medina is a comic book artist and illustrator. He began his career illustrating such titles as Berserker and Megaton at Megaton Comics. He subsequently worked for First Publishing on such titles as Dreadstar and Hammer of God in the late 1980s before working at Marvel Comics on The Incredible Hulk, Warlock and the Infinity Watch, Avengers and the Amazing Spider-Man. The artist eventually came to Image Comics and began illustrating Sam and Twitch, a spinoff of the title Spawn. Medina later illustrated Spawn itself and Kiss: Psycho Circus, based on the rock music group Kiss.