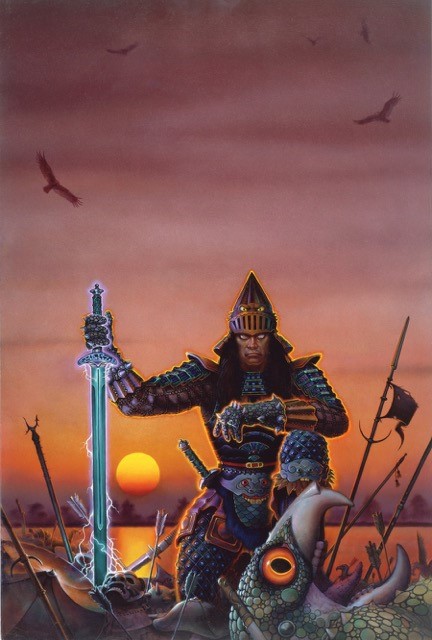 --
Accepting Offers
--
Offers
Offer Confirmation
You are about to submit an offer of . If accepted, you are legally obligated to purchase the book. Are you sure you want to continue?
Buy Confirmation
You are about to buy this item for , and will be legally obligated under the terms of our User Agreement to pay for it in a timely fashion. Continue?
COMMENTS: Don Maitz oils on panel; 20" x 30"; Cover to novel by Eric Von Lusbader titled, Dai San
Read Description ▼
Sell One Of These Inquire About This

DESCRIPTION
Share This:
Don Maitz oils on panel; 20" x 30"; Cover to novel by Eric Von Lusbader titled, Dai SanThe hero has transformed into the mythical warrior, the Dai San, and here he looks over the final battlefield of the, Kai Feng, the war to end all wars. Cover to the third novel in the Sunset Warrior series by Eric Von Lustbader titled, Dai San. Eric Lustbader received attention with his Ninja book and has taken over writing Jason Bourne novels by the late Robert Ludlum.

Don Maitz is a science fiction, fantasy and commercial artist, that has published advertisement works with Marvel and DC. Maitz has also produced over 200 paperback covers in the Sci-Fi/Fantasy market, game box art and card art.