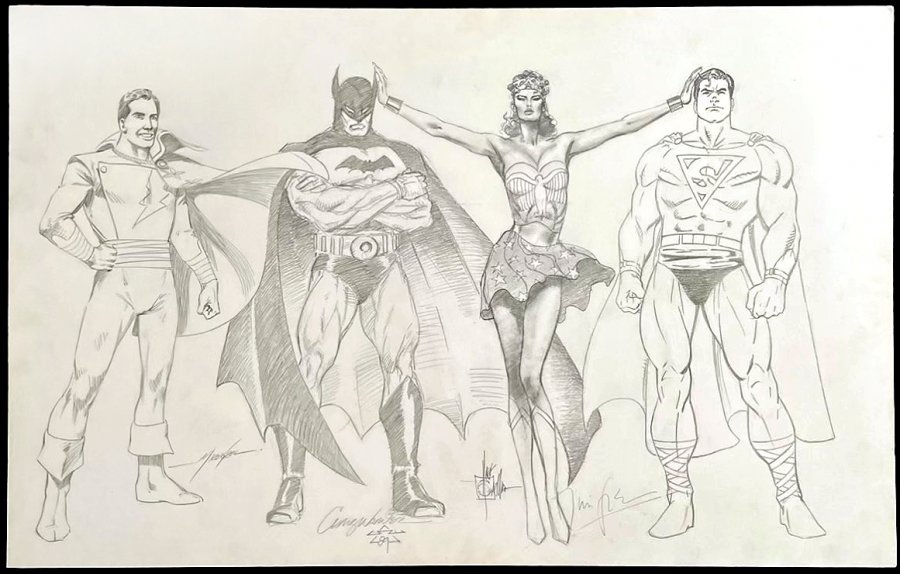 Auction Ends In
$500
Current Bid
5
Bids
NEXT MIN. BID: $550
FYI there's no need to include decimal points(.).
Bid Confirmation
You are about to submit a bid of . If you win this auction, you are legally obligated to purchase the book. Are you sure you want to continue?
Don't Show Again (except when higher than min. bid)
(Reserve Not Met)
PUBLISHER: -----------
COMMENTS: Mike Grell/Chris Warner/Mark Beachum/Jim Lee art; c.1989; image size 32" x 20"
Read Description ▼
Sell One Of These Inquire About This

Watch
Mike Grell/Chris Warner/Mark Beachum/Jim Lee art; c.1989; image size 32" x 20"Acquiring commissions from artists is as old as conventions themselves, it's one of the things that connects fans to creators. When people go above and beyond is when these drawings become truly special. This fan, who assembled this over several conventions in the late 1980s, had the wherewithal to come prepared with a huge board on which he had artists depict DC's earliest characters as they appeared at the beginning. Fawcett's Captain Marvel (who would eventually join DC's ranks) by Mike Grell, Batman by Chris Warner, Wonder Woman by Mark Beachum, and Superman by Jim Lee, in what is purportedly the first time he was ever commissioned the Man of Steel. Each artist truly embraced the concept and provided a wonderful illustration that both honors the character and shows off each of their individual artistic quirks. A truly wonderful and unique piece that would be a spectacular addition to any collection. Pencil on board. Art is in excellent condition. Signed by each artist beneath their contribution.